In the preceding section, we said that scientists were able to create electric charge only on nonmetallic materials and never on metals. To understand why this is the case, you have to understand more about the nature and structure of atoms. In this section, we discuss how and why electric charges do—or do not—move through materials (Figure 5.9). A more complete description is given in a later chapter.

As discussed in the previous section, electrons surround the tiny nucleus in the form of a (comparatively) vast cloud of negative charge. However, this cloud does have a definite structure to it. Let’s consider an atom of the most commonly used conductor, copper.

For reasons that will become clear in Atomic Structure, there is an outermost electron that is only loosely bound to the atom’s nucleus. It can be easily dislodged; it then moves to a neighboring atom. In a large mass of copper atoms (such as a copper wire or a sheet of copper), these vast numbers of outermost electrons (one per atom) wander from atom to atom, and are the electrons that do the moving when electricity flows. These wandering, or “free,” electrons are called conduction electrons, and copper is therefore an excellent conductor (of electric charge). All conducting elements have a similar arrangement of their electrons, with one or two conduction electrons. This includes most metals.

Insulators, in contrast, are made from materials that lack conduction electrons; charge flows only with great difficulty, if at all. Even if excess charge is added to an insulating material, it cannot move, remaining indefinitely in place. This is why insulating materials exhibit the electrical attraction and repulsion forces described earlier, whereas conductors do not; any excess charge placed on a conductor would instantly flow away (due to mutual repulsion from existing charges), leaving no excess charge around to create forces. Charge cannot flow along or through an insulator, so its electric forces remain for long periods of time. (Charge will dissipate from an insulator, given enough time.) As it happens, amber, fur, and most semi-precious gems are insulators, as are materials like wood, glass, and plastic.

The result is the formation of what is called an electric dipole, from a Latin phrase meaning “two ends.” The presence of electric charges on the insulator—and the electric forces they apply to the conduction electrons—creates, or “induces,” the dipole in the conductor.

When a charged rod is brought near a neutral substance, an insulator in this case, the distribution of charge in atoms and molecules is shifted slightly. Opposite charge is attracted nearer the external charged rod, while like charge is repelled. Since the electrostatic force decreases with distance, the repulsion of like charges is weaker than the attraction of unlike charges, and so there is a net attraction. Thus, a positively charged glass rod attracts neutral pieces of paper, as will a negatively charged rubber rod. Some molecules, like water, are polar molecules. Polar molecules have a natural or inherent separation of charge, although they are neutral overall. Polar molecules are particularly affected by other charged objects and show greater polarization effects than molecules with naturally uniform charge distributions.

When the two ends of a dipole can be separated, this method of charging by induction may be used to create charged objects without transferring charge. In Figure 5.12, we see two neutral metal spheres in contact with one another but insulated from the rest of the world. A positively charged rod is brought near one of them, attracting negative charge to that side, leaving the other sphere positively charged.

Another method of charging by induction is shown in Figure 5.13. The neutral metal sphere is polarized when a charged rod is brought near it. The sphere is then grounded, meaning that a conducting wire is run from the sphere to the ground. Since Earth is large and most of the ground is a good conductor, it can supply or accept excess charge easily. In this case, electrons are attracted to the sphere through a wire called the ground wire, because it supplies a conducting path to the ground. The ground connection is broken before the charged rod is removed, leaving the sphere with an excess charge opposite to that of the rod. Again, an opposite charge is achieved when charging by induction, and the charged rod loses none of its excess charge.

When a glass rod is rubbed with silk, it becomes positive and the silk becomes negative—yet both attract dust. Does the dust have a third type of charge that is attracted to both positive and negative? Explain.

Why does a car always attract dust right after it is polished? (Note that car wax and car tires are insulators.)

Does the uncharged conductor shown below experience a net electric force? 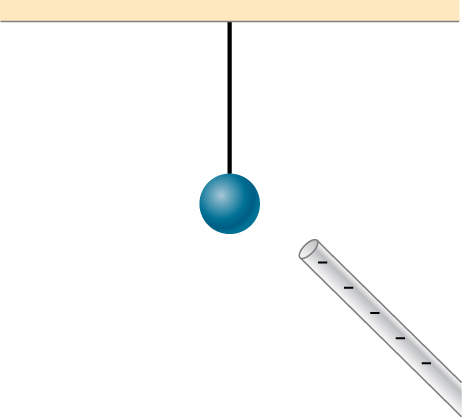 While walking on a rug, a person frequently becomes charged because of the rubbing between his shoes and the rug. This charge then causes a spark and a slight shock when the person gets close to a metal object. Why are these shocks so much more common on a dry day?

Trucks that carry gasoline often have chains dangling from their undercarriages and brushing the ground. Why?

Why do electrostatic experiments work so poorly in humid weather?

Why do some clothes cling together after being removed from the clothes dryer? Does this happen if they’re still damp?

Can induction be used to produce charge on an insulator?

Suppose someone tells you that rubbing quartz with cotton cloth produces a third kind of charge on the quartz. Describe what you might do to test this claim.

A handheld copper rod does not acquire a charge when you rub it with a cloth. Explain why.

How many coulombs of positive charge are there in 4.00 kg of plutonium, given its atomic mass is 244 and that each plutonium atom has 94 protons?

conductor
material that allows electrons to move separately from their atomic orbits; object with properties that allow charges to move about freely within it

insulator
material that holds electrons securely within their atomic orbits