There are a number of physiological mechanisms that serve as the basis for hunger. When our stomachs are empty, they contract, causing both hunger pangs and the secretion of chemical messages that travel to the brain to serve as a signal to initiate feeding behavior. When our blood glucose levels drop, the pancreas and liver generate a number of chemical signals that induce hunger (Konturek et al., 2003; Novin, Robinson, Culbreth, & Tordoff, 1985) and thus initiate feeding behavior.

For most people, once they have eaten, they feel , or fullness and satisfaction, and their eating behavior stops. Like the initiation of eating, satiation is also regulated by several physiological mechanisms. As blood glucose levels increase, the pancreas and liver send signals to shut off hunger and eating (Drazen & Woods, 2003; Druce, Small, & Bloom, 2004; Greary, 1990). The food’s passage through the gastrointestinal tract also provides important satiety signals to the brain (Woods, 2004), and fat cells release , a satiety hormone.

The various hunger and satiety signals that are involved in the regulation of eating are integrated in the brain. Research suggests that several areas of the hypothalamus and hindbrain are especially important sites where this integration occurs (Ahima & Antwi, 2008; Woods & D’Alessio, 2008). Ultimately, activity in the brain determines whether or not we engage in feeding behavior (Figure 1).

Our body weight is affected by a number of factors, including gene-environment interactions, and the number of calories we consume versus the number of calories we burn in daily activity. If our caloric intake exceeds our caloric use, our bodies store excess energy in the form of fat. If we consume fewer calories than we burn off, then stored fat will be converted to energy. Our energy expenditure is obviously affected by our levels of activity, but our body’s metabolic rate also comes into play. A person’s is the amount of energy that is expended in a given period of time, and there is tremendous individual variability in our metabolic rates. People with high rates of metabolism are able to burn off calories more easily than those with lower rates of metabolism.

We all experience fluctuations in our weight from time to time, but generally, most people’s weights fluctuate within a narrow margin, in the absence of extreme changes in diet and/or physical activity. This observation led some to propose a set-point theory of body weight regulation. The asserts that each individual has an ideal body weight, or set point, which is resistant to change. This set-point is genetically predetermined and efforts to move our weight significantly from the set-point are resisted by compensatory changes in energy intake and/or expenditure (Speakman et al., 2011).

Some of the predictions generated from this particular theory have not received empirical support. For example, there are no changes in metabolic rate between individuals who had recently lost significant amounts of weight and a control group (Weinsier et al., 2000). In addition, the set-point theory fails to account for the influence of social and environmental factors in the regulation of body weight (Martin-Gronert & Ozanne, 2013; Speakman et al., 2011). Despite these limitations, set-point theory is still often used as a simple, intuitive explanation of how body weight is regulated.

When someone weighs more than what is generally accepted as healthy for a given height, they are considered overweight or obese. According to the Centers for Disease Control and Prevention (CDC), an adult with a body mass index (BMI) between 25 and 29.9 is considered (Figure 2). An adult with a BMI of 30 or higher is considered (Centers for Disease Control and Prevention [CDC], 2012). People who are so overweight that they are at risk for death are classified as morbidly obese. is defined as having a BMI over 40. Note that although BMI has been used as a healthy weight indicator by the World Health Organization (WHO), the CDC, and other groups, its value as an assessment tool has been questioned. The BMI is most useful for studying populations, which is the work of these organizations. It is less useful in assessing an individual since height and weight measurements fail to account for important factors like fitness level. An athlete, for example, may have a high BMI because the tool doesn’t distinguish between the body’s percentage of fat and muscle in a person’s weight. 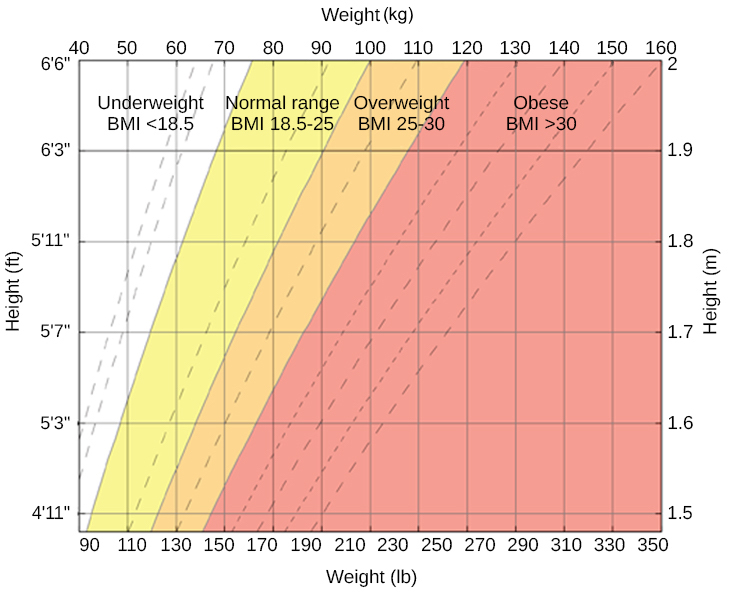 Being extremely overweight or obese is a risk factor for several negative health consequences. These include, but are not limited to, an increased risk for cardiovascular disease, stroke, Type 2 diabetes, liver disease, sleep apnea, colon cancer, breast cancer, infertility, and arthritis. Given that it is estimated that in the United States around one-third of the adult population is obese and that nearly two-thirds of adults and one in six children qualify as overweight (CDC, 2012), there is substantial interest in trying to understand how to combat this important public health concern.

What causes someone to be overweight or obese? You have already read that both genes and environment are important factors for determining body weight, and if more calories are consumed than expended, excess energy is stored as fat. However, socioeconomic status and the physical environment must also be considered as contributing factors (CDC, 2012). For example, an individual who lives in an impoverished neighborhood that is overrun with crime may never feel comfortable walking or biking to work or to the local market. This might limit the amount of physical activity in which he engages and result in an increased body weight. Similarly, some people may not be able to afford healthy food options from their market, or these options may be unavailable (especially in urban areas or poorer neighborhoods); therefore, some people rely primarily on available, inexpensive, high fat, and high calorie fast food as their primary source of nutrition.

Generally, overweight and obese individuals are encouraged to try to reduce their weights through a combination of both diet and exercise. While some people are very successful with these approaches, many struggle to lose excess weight. In cases in which a person has had no success with repeated attempts to reduce weight or is at risk for death because of obesity, bariatric surgery may be recommended. Bariatric surgery is a type of surgery specifically aimed at weight reduction, and it involves modifying the gastrointestinal system to reduce the amount of food that can be eaten and/or limiting how much of the digested food can be absorbed (Figure 3) (Mayo Clinic, 2013). A recent meta-analysis suggests that bariatric surgery is more effective than non-surgical treatment for obesity in the two-years immediately following the procedure, but to date, no long-term studies yet exist (Gloy et al., 2013).

Prader-Willi Syndrome (PWS) is a genetic disorder that results in persistent feelings of intense hunger and reduced rates of metabolism. Typically, affected children have to be supervised around the clock to ensure that they do not engage in excessive eating. Currently, PWS is the leading genetic cause of morbid obesity in children, and it is associated with a number of cognitive deficits and emotional problems (Figure 4).

While genetic testing can be used to make a diagnosis, there are a number of behavioral diagnostic criteria associated with PWS. From birth to 2 years of age, lack of muscle tone and poor sucking behavior may serve as early signs of PWS. Developmental delays are seen between the ages of 6 and 12, and excessive eating and cognitive deficits associated with PWS usually onset a little later.

While the exact mechanisms of PWS are not fully understood, there is evidence that affected individuals have hypothalamic abnormalities. This is not surprising, given the hypothalamus’s role in regulating hunger and eating. However, as you will learn in the next section of this module, the hypothalamus is also involved in the regulation of sexual behavior. Consequently, many individuals suffering from PWS fail to reach sexual maturity during adolescence.

There is no current treatment or cure for PWS. However, if weight can be controlled in these individuals, then their life expectancies are significantly increased (historically, sufferers of PWS often died in adolescence or early adulthood). Advances in the use of various psychoactive medications and growth hormones continue to enhance the quality of life for individuals with PWS (Cassidy & Driscoll, 2009; Prader-Willi Syndrome Association, 2012).

assertion that each individual has an ideal body weight, or set point, that is resistant to change

adult with a BMI of 30 or higher

adult with a BMI over 40