The concept of work involves force and displacement; the work-energy theorem relates the net work done on a body to the difference in its kinetic energy, calculated between two points on its trajectory. None of these quantities or relations involves time explicitly, yet we know that the time available to accomplish a particular amount of work is frequently just as important to us as the amount itself. In the chapter-opening figure, several sprinters may have achieved the same velocity at the finish, and therefore did the same amount of work, but the winner of the race did it in the least amount of time.

We express the relation between work done and the time interval involved in doing it, by introducing the concept of power. Since work can vary as a function of time, we first define average power as the work done during a time interval, divided by the interval,

Then, we can define the instantaneous power (frequently referred to as just plain power).

Power is defined as the rate of doing work, or the limit of the average power for time intervals approaching zero,

The work-energy theorem relates how work can be transformed into kinetic energy. Since there are other forms of energy as well, as we discuss in the next chapter, we can also define power as the rate of transfer of energy. Work and energy are measured in units of joules, so power is measured in units of joules per second, which has been given the SI name watts, abbreviation W: [latex]1\,\text{J/s}=1\,\text{W}[/latex]. Another common unit for expressing the power capability of everyday devices is horsepower: [latex]1\,\text{hp}=746\,\text{W}[/latex].

An 80-kg army trainee does 10 pull-ups in 10 s (Figure). How much average power do the trainee’s muscles supply moving his body? (Hint: Make reasonable estimates for any quantities needed.)

The work done against gravity, going up or down a distance [latex]\Delta y[/latex], is [latex]mg\Delta y.[/latex] (If you lift and lower yourself at constant speed, the force you exert cancels gravity over the whole pull-up cycle.) Thus, the work done by the trainee’s muscles (moving, but not accelerating, his body) for a complete repetition (up and down) is [latex]2mg\Delta y.[/latex] Let’s assume that [latex]\Delta y=2\text{ft}\approx 60\,\text{cm}\text{.}[/latex] Also, assume that the arms comprise 10% of the body mass and are not included in the moving mass. With these assumptions, we can calculate the work done for 10 pull-ups and divide by 10 s to get the average power.

The result we get, applying our assumptions, is

This is typical for power expenditure in strenuous exercise; in everyday units, it’s somewhat more than one horsepower [latex](1\,\text{hp}=746\,\text{W}).[/latex]

Estimate the power expended by a weightlifter raising a 150-kg barbell 2 m in 3 s.

where [latex]\mathbf{\overset{\to }{v}}[/latex] is the velocity of the body. The fact that the limits implied by the derivatives exist, for the motion of a real body, justifies the rearrangement of the infinitesimals.

How much power must an automobile engine expend to move a 1200-kg car up a 15% grade at 90 km/h (Figure)? Assume that 25% of this power is dissipated overcoming air resistance and friction.

At constant velocity, there is no change in kinetic energy, so the net work done to move the car is zero. Therefore the power supplied by the engine to move the car equals the power expended against gravity and air resistance. By assumption, 75% of the power is supplied against gravity, which equals [latex]m\mathbf{\overset{\to }{g}}\cdot \mathbf{\overset{\to }{v}}=mgv\,\text{sin}\,\theta ,[/latex] where [latex]\theta[/latex] is the angle of the incline. A 15% grade means [latex]\text{tan}\,\theta =0.15.[/latex] This reasoning allows us to solve for the power required.

Carrying out the suggested steps, we find

or about 78 hp. (You should supply the steps used to convert units.)

This is a reasonable amount of power for the engine of a small to mid-size car to supply [latex](1\,\text{hp}=0.746\,\text{kW}\text{).}[/latex] Note that this is only the power expended to move the car. Much of the engine’s power goes elsewhere, for example, into waste heat. That’s why cars need radiators. Any remaining power could be used for acceleration, or to operate the car’s accessories.

Most electrical appliances are rated in watts. Does this rating depend on how long the appliance is on? (When off, it is a zero-watt device.) Explain in terms of the definition of power.

Explain, in terms of the definition of power, why energy consumption is sometimes listed in kilowatt-hours rather than joules. What is the relationship between these two energy units?

A spark of static electricity, such as that you might receive from a doorknob on a cold dry day, may carry a few hundred watts of power. Explain why you are not injured by such a spark.

Can the power expended by a force be negative?

A person in good physical condition can put out 100 W of useful power for several hours at a stretch, perhaps by pedaling a mechanism that drives an electric generator. Neglecting any problems of generator efficiency and practical considerations such as resting time: (a) How many people would it take to run a 4.00-kW electric clothes dryer? (b) How many people would it take to replace a large electric power plant that generates 800 MW?

(a) What is the average power consumption in watts of an appliance that uses 5.00 [latex]\text{kW}\cdot \text{h}[/latex] of energy per day? (b) How many joules of energy does this appliance consume in a year?

A 500-kg dragster accelerates from rest to a final speed of 110 m/s in 400 m (about a quarter of a mile) and encounters an average frictional force of 1200 N. What is its average power output in watts and horsepower if this takes 7.30 s?

Calculate the power output needed for a 950-kg car to climb a [latex]2.00^\circ[/latex] slope at a constant 30.0 m/s while encountering wind resistance and friction totaling 600 N.

The man of the preceding problem consumes approximately [latex]1.05\times {10}^{7}\,\text{J}[/latex] (2500 food calories) of energy per day in maintaining a constant weight. What is the average power he produces over a day? Compare this with his power production when he runs up the stairs.

An electron in a television tube is accelerated uniformly from rest to a speed of [latex]8.4\times {10}^{7}\,\text{m/s}[/latex] over a distance of 2.5 cm. What is the power delivered to the electron at the instant that its displacement is 1.0 cm?

Coal is lifted out of a mine a vertical distance of 50 m by an engine that supplies 500 W to a conveyer belt. How much coal per minute can be brought to the surface? Ignore the effects of friction.

A girl pulls her 15-kg wagon along a flat sidewalk by applying a 10-N force at [latex]37^\circ[/latex] to the horizontal. Assume that friction is negligible and that the wagon starts from rest. (a) How much work does the girl do on the wagon in the first 2.0 s. (b) How much instantaneous power does she exert at [latex]t=2.0\,\text{s}[/latex]?

A typical automobile engine has an efficiency of 25%. Suppose that the engine of a 1000-kg automobile has a maximum power output of 140 hp. What is the maximum grade that the automobile can climb at 50 km/h if the frictional retarding force on it is 300 N? 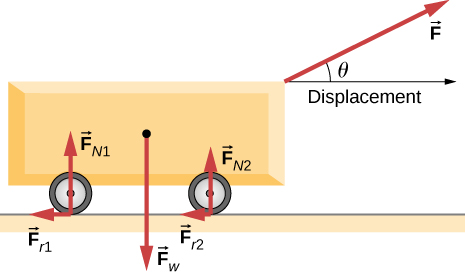 Consider a particle on which a force acts that depends on the position of the particle. This force is given by [latex]{\mathbf{\overset{\to }{F}}}_{1}=(2y)\mathbf{\hat{i}}+(3x)\mathbf{\hat{j}}.[/latex] Find the work done by this force when the particle moves from the origin to a point 5 meters to the right on the x-axis. 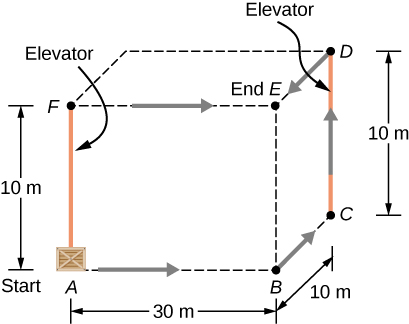 A 7.0-kg box slides along a horizontal frictionless floor at 1.7 m/s and collides with a relatively massless spring that compresses 23 cm before the box comes to a stop. (a) How much kinetic energy does the box have before it collides with the spring? (b) Calculate the work done by the spring. (c) Determine the spring constant of the spring.

You are driving your car on a straight road with a coefficient of friction between the tires and the road of 0.55. A large piece of debris falls in front of your view and you immediate slam on the brakes, leaving a skid mark of 30.5 m (100-feet) long before coming to a stop. A policeman sees your car stopped on the road, looks at the skid mark, and gives you a ticket for traveling over the 13.4 m/s (30 mph) speed limit. Should you fight the speeding ticket in court?

A crate is being pushed across a rough floor surface. If no force is applied on the crate, the crate will slow down and come to a stop. If the crate of mass 50 kg moving at speed 8 m/s comes to rest in 10 seconds, what is the rate at which the frictional force on the crate takes energy away from the crate?

Suppose a horizontal force of 20 N is required to maintain a speed of 8 m/s of a 50 kg crate. (a) What is the power of this force? (b) Note that the acceleration of the crate is zero despite the fact that 20 N force acts on the crate horizontally. What happens to the energy given to the crate as a result of the work done by this 20 N force?

Grains from a hopper falls at a rate of 10 kg/s vertically onto a conveyor belt that is moving horizontally at a constant speed of 2 m/s. (a) What force is needed to keep the conveyor belt moving at the constant velocity? (b) What is the minimum power of the motor driving the conveyor belt?

A cyclist in a race must climb a [latex]5^\circ[/latex] hill at a speed of 8 m/s. If the mass of the bike and the biker together is 80 kg, what must be the power output of the biker to achieve the goal?

Shown below is a 40-kg crate that is pushed at constant velocity a distance 8.0 m along a [latex]30^\circ[/latex] incline by the horizontal force [latex]\mathbf{\overset{\to }{F}}.[/latex] The coefficient of kinetic friction between the crate and the incline is [latex]{\mu }_{k}=0.40.[/latex] Calculate the work done by (a) the applied force, (b) the frictional force, (c) the gravitational force, and (d) the net force. 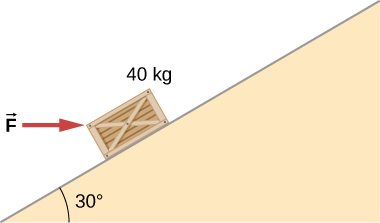 The surface of the preceding problem is modified so that the coefficient of kinetic friction is decreased. The same horizontal force is applied to the crate, and after being pushed 8.0 m, its speed is 5.0 m/s. How much work is now done by the force of friction? Assume that the crate starts at rest. 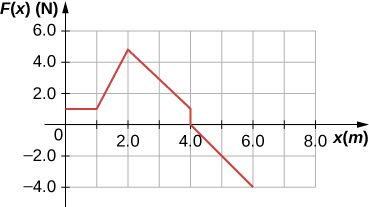 Suppose that the air resistance a car encounters is independent of its speed. When the car travels at 15 m/s, its engine delivers 20 hp to its wheels. (a) What is the power delivered to the wheels when the car travels at 30 m/s? (b) How much energy does the car use in covering 10 km at 15 m/s? At 30 m/s? Assume that the engine is 25% efficient. (c) Answer the same questions if the force of air resistance is proportional to the speed of the automobile. (d) What do these results, plus your experience with gasoline consumption, tell you about air resistance?

Consider a linear spring, as in Figure(a), with mass M uniformly distributed along its length. The left end of the spring is fixed, but the right end, at the equilibrium position [latex]x=0,[/latex] is moving with speed v in the x-direction. What is the total kinetic energy of the spring? (Hint: First express the kinetic energy of an infinitesimal element of the spring dm in terms of the total mass, equilibrium length, speed of the right-hand end, and position along the spring; then integrate.)