3 Motion Along a Straight Line

We have now seen how to calculate the average velocity between two positions. However, since objects in the real world move continuously through space and time, we would like to find the velocity of an object at any single point. We can find the velocity of the object anywhere along its path by using some fundamental principles of calculus. This section gives us better insight into the physics of motion and will be useful in later chapters.

The quantity that tells us how fast an object is moving anywhere along its path is the instantaneous velocity, usually called simply velocity. It is the average velocity between two points on the path in the limit that the time (and therefore the displacement) between the two points approaches zero. To illustrate this idea mathematically, we need to express position x as a continuous function of t denoted by x(t). The expression for the average velocity between two points using this notation is [latex]\overset{\text{–}}{v}=\frac{x({t}_{2})-x({t}_{1})}{{t}_{2}-{t}_{1}}[/latex]. To find the instantaneous velocity at any position, we let [latex]{t}_{1}=t[/latex] and [latex]{t}_{2}=t+\Delta t[/latex]. After inserting these expressions into the equation for the average velocity and taking the limit as [latex]\Delta t\to 0[/latex], we find the expression for the instantaneous velocity:

The instantaneous velocity of an object is the limit of the average velocity as the elapsed time approaches zero, or the derivative of x with respect to t:

Finding Velocity from a Position-Versus-Time Graph

The graph contains three straight lines during three time intervals. We find the velocity during each time interval by taking the slope of the line using the grid.

During the time interval between 0 s and 0.5 s, the object’s position is moving away from the origin and the position-versus-time curve has a positive slope. At any point along the curve during this time interval, we can find the instantaneous velocity by taking its slope, which is +1 m/s, as shown in Figure. In the subsequent time interval, between 0.5 s and 1.0 s, the position doesn’t change and we see the slope is zero. From 1.0 s to 2.0 s, the object is moving back toward the origin and the slope is −0.5 m/s. The object has reversed direction and has a negative velocity.

In everyday language, most people use the terms speed and velocity interchangeably. In physics, however, they do not have the same meaning and are distinct concepts. One major difference is that speed has no direction; that is, speed is a scalar.

We can calculate the average speed by finding the total distance traveled divided by the elapsed time:

Average speed is not necessarily the same as the magnitude of the average velocity, which is found by dividing the magnitude of the total displacement by the elapsed time. For example, if a trip starts and ends at the same location, the total displacement is zero, and therefore the average velocity is zero. The average speed, however, is not zero, because the total distance traveled is greater than zero. If we take a road trip of 300 km and need to be at our destination at a certain time, then we would be interested in our average speed.

When calculating instantaneous velocity, we need to specify the explicit form of the position function x(t). For the moment, let’s use polynomials [latex]x(t)=A{t}^{n}[/latex], because they are easily differentiated using the power rule of calculus:

The following example illustrates the use of Figure.

The velocity of the particle gives us direction information, indicating the particle is moving to the left (west) or right (east). The speed gives the magnitude of the velocity. By graphing the position, velocity, and speed as functions of time, we can understand these concepts visually Figure. In (a), the graph shows the particle moving in the positive direction until t = 0.5 s, when it reverses direction. The reversal of direction can also be seen in (b) at 0.5 s where the velocity is zero and then turns negative. At 1.0 s it is back at the origin where it started. The particle’s velocity at 1.0 s in (b) is negative, because it is traveling in the negative direction. But in (c), however, its speed is positive and remains positive throughout the travel time. We can also interpret velocity as the slope of the position-versus-time graph. The slope of x(t) is decreasing toward zero, becoming zero at 0.5 s and increasingly negative thereafter. This analysis of comparing the graphs of position, velocity, and speed helps catch errors in calculations. The graphs must be consistent with each other and help interpret the calculations.

There is a distinction between average speed and the magnitude of average velocity. Give an example that illustrates the difference between these two quantities.

Does the speedometer of a car measure speed or velocity?

If you divide the total distance traveled on a car trip (as determined by the odometer) by the elapsed time of the trip, are you calculating average speed or magnitude of average velocity? Under what circumstances are these two quantities the same? 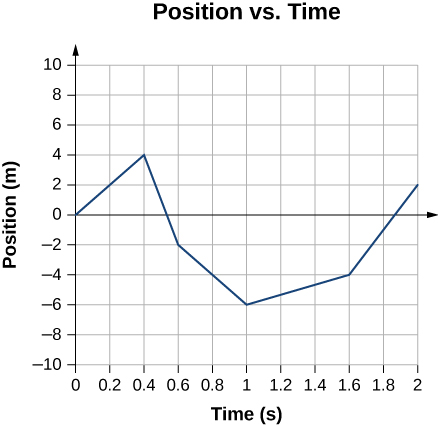 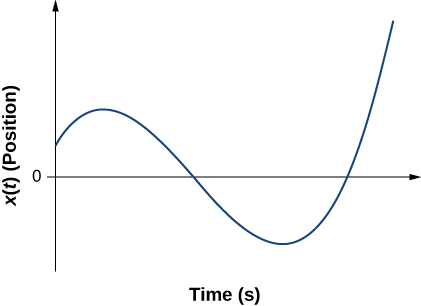 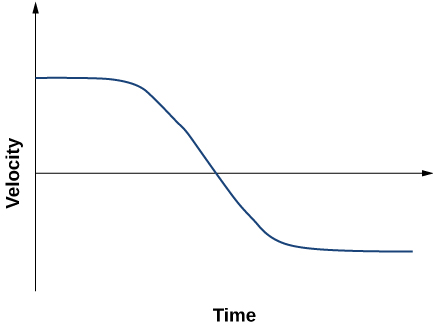 Unreasonable results. A particle moves along the x-axis according to [latex]x(t)=3{t}^{3}+5t\text{​}[/latex]. At what time is the velocity of the particle equal to zero? Is this reasonable?

instantaneous velocity
the velocity at a specific instant or time point

3.2 Instantaneous Velocity and Speed Copyright © 2016 by OpenStax. All Rights Reserved.