The net work done increases the fluid’s kinetic energy. As a result, the pressure drops in a rapidly moving fluid whether or not the fluid is confined to a tube.

There are many common examples of pressure dropping in rapidly moving fluids. For instance, shower curtains have a disagreeable habit of bulging into the shower stall when the shower is on. The reason is that the high-velocity stream of water and air creates a region of lower pressure inside the shower, whereas the pressure on the other side remains at the standard atmospheric pressure. This pressure difference results in a net force, pushing the curtain inward. Similarly, when a car passes a truck on the highway, the two vehicles seem to pull toward each other. The reason is the same: The high velocity of the air between the car and the truck creates a region of lower pressure between the vehicles, and they are pushed together by greater pressure on the outside (Figure). This effect was observed as far back as the mid-1800s, when it was found that trains passing in opposite directions tipped precariously toward one another.

The application of the principle of conservation of energy to frictionless laminar flow leads to a very useful relation between pressure and flow speed in a fluid. This relation is called Bernoulli’s equation, named after Daniel Bernoulli (1700–1782), who published his studies on fluid motion in his book Hydrodynamica (1738).

Consider an incompressible fluid flowing through a pipe that has a varying diameter and height, as shown in Figure. Subscripts 1 and 2 in the figure denote two locations along the pipe and illustrate the relationships between the areas of the cross sections A, the speed of flow v, the height from ground y, and the pressure p at each point. We assume here that the density at the two points is the same—therefore, density is denoted by [latex]\rho[/latex] without any subscripts—and since the fluid in incompressible, the shaded volumes must be equal.

We also assume that there are no viscous forces in the fluid, so the energy of any part of the fluid will be conserved. To derive Bernoulli’s equation, we first calculate the work that was done on the fluid:

The change in potential energy is

The energy equation then becomes

This relation states that the mechanical energy of any part of the fluid changes as a result of the work done by the fluid external to that part, due to varying pressure along the way. Since the two points were chosen arbitrarily, we can write Bernoulli’s equation more generally as a conservation principle along the flow.

For an incompressible, frictionless fluid, the combination of pressure and the sum of kinetic and potential energy densities is constant not only over time, but also along a streamline:

A special note must be made here of the fact that in a dynamic situation, the pressures at the same height in different parts of the fluid may be different if they have different speeds of flow.

According to Bernoulli’s equation, if we follow a small volume of fluid along its path, various quantities in the sum may change, but the total remains constant. Bernoulli’s equation is, in fact, just a convenient statement of conservation of energy for an incompressible fluid in the absence of friction.

The general form of Bernoulli’s equation has three terms in it, and it is broadly applicable. To understand it better, let us consider some specific situations that simplify and illustrate its use and meaning.

First consider the very simple situation where the fluid is static—that is, [latex]{v}_{1}={v}_{2}=0.[/latex] Bernoulli’s equation in that case is

We can further simplify the equation by setting [latex]{h}_{2}=0.[/latex] (Any height can be chosen for a reference height of zero, as is often done for other situations involving gravitational force, making all other heights relative.) In this case, we get

This equation tells us that, in static fluids, pressure increases with depth. As we go from point 1 to point 2 in the fluid, the depth increases by [latex]{h}_{1}[/latex], and consequently, [latex]{p}_{2}[/latex] is greater than [latex]{p}_{1}[/latex] by an amount [latex]\rho g{h}_{1}[/latex]. In the very simplest case, [latex]{p}_{1}[/latex] is zero at the top of the fluid, and we get the familiar relationship [latex]p=\rho gh[/latex]. [latex](\text{Recall that}\,p=\rho gh[/latex] and [latex]\Delta {U}_{\text{g}}=\text{−}mgh.)[/latex] Thus, Bernoulli’s equation confirms the fact that the pressure change due to the weight of a fluid is [latex]\rho gh[/latex]. Although we introduce Bernoulli’s equation for fluid motion, it includes much of what we studied for static fluids earlier.

Suppose a fluid is moving but its depth is constant—that is, [latex]{h}_{1}={h}_{2}[/latex]. Under this condition, Bernoulli’s equation becomes

Situations in which fluid flows at a constant depth are so common that this equation is often also called Bernoulli’s principle, which is simply Bernoulli’s equation for fluids at constant depth. (Note again that this applies to a small volume of fluid as we follow it along its path.) Bernoulli’s principle reinforces the fact that pressure drops as speed increases in a moving fluid: If [latex]{v}_{2}[/latex] is greater than [latex]{v}_{1}[/latex] in the equation, then [latex]{p}_{2}[/latex] must be less than [latex]{p}_{1}[/latex] for the equality to hold.

Level flow means constant depth, so Bernoulli’s principle applies. We use the subscript 1 for values in the hose and 2 for those in the nozzle. We are thus asked to find [latex]{p1}_{}[/latex].

Many devices and situations occur in which fluid flows at a constant height and thus can be analyzed with Bernoulli’s principle.

People have long put the Bernoulli principle to work by using reduced pressure in high-velocity fluids to move things about. With a higher pressure on the outside, the high-velocity fluid forces other fluids into the stream. This process is called entrainment. Entrainment devices have been in use since ancient times as pumps to raise water to small heights, as is necessary for draining swamps, fields, or other low-lying areas. Some other devices that use the concept of entrainment are shown in Figure.

Figure shows two devices that apply Bernoulli’s principle to measure fluid velocity. The manometer in part (a) is connected to two tubes that are small enough not to appreciably disturb the flow. The tube facing the oncoming fluid creates a dead spot having zero velocity ([latex]{v}_{1}=0[/latex]) in front of it, while fluid passing the other tube has velocity [latex]{v}_{2}[/latex]. This means that Bernoulli’s principle as stated in

(Recall that the symbol [latex]\propto[/latex] means “proportional to.”) Solving for [latex]{v}_{2}[/latex], we see that

Part (b) shows a version of this device that is in common use for measuring various fluid velocities; such devices are frequently used as air-speed indicators in aircraft.

We must use Bernoulli’s equation to solve for the pressure, since depth is not constant.

This rather large speed is helpful in reaching the fire. Now, taking [latex]{h}_{1}[/latex] to be zero, we solve Bernoulli’s equation for [latex]{p}_{2}[/latex]:

You can squirt water from a garden hose a considerably greater distance by partially covering the opening with your thumb. Explain how this works.

Water is shot nearly vertically upward in a decorative fountain and the stream is observed to broaden as it rises. Conversely, a stream of water falling straight down from a faucet narrows. Explain why.

A tube with a narrow segment designed to enhance entrainment is called a Venturi, such as shown below. Venturis are very commonly used in carburetors and aspirators. How does this structure bolster entrainment? 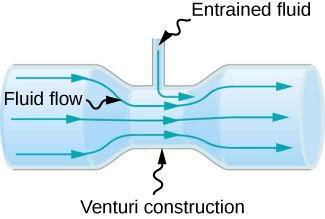 Some chimney pipes have a T-shape, with a crosspiece on top that helps draw up gases whenever there is even a slight breeze. Explain how this works in terms of Bernoulli’s principle.

Is there a limit to the height to which an entrainment device can raise a fluid? Explain your answer.

Why is it preferable for airplanes to take off into the wind rather than with the wind?

Roofs are sometimes pushed off vertically during a tropical cyclone, and buildings sometimes explode outward when hit by a tornado. Use Bernoulli’s principle to explain these phenomena.

It is dangerous to stand close to railroad tracks when a rapidly moving commuter train passes. Explain why atmospheric pressure would push you toward the moving train.

David rolled down the window on his car while driving on the freeway. An empty plastic bag on the floor promptly flew out the window. Explain why.

The old rubber boot shown below has two leaks. To what maximum height can the water squirt from Leak 1? How does the velocity of water emerging from Leak 2 differ from that of Leak 1? Explain your responses in terms of energy. 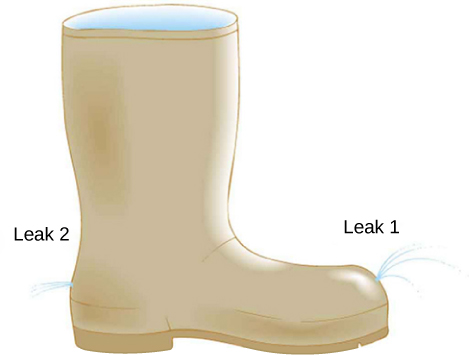 Verify that pressure has units of energy per unit volume.

Every few years, winds in Boulder, Colorado, attain sustained speeds of 45.0 m/s (about 100 mph) when the jet stream descends during early spring. Approximately what is the force due to the Bernoulli equation on a roof having an area of [latex]220{\text{m}}^{2}[/latex]? Typical air density in Boulder is [latex]1.14{\text{kg/m}}^{3}[/latex], and the corresponding atmospheric pressure is [latex]8.89\times {10}^{4}{\text{N/m}}^{2}[/latex]. (Bernoulli’s principle as stated in the text assumes laminar flow. Using the principle here produces only an approximate result, because there is significant turbulence.)

What is the pressure drop due to the Bernoulli Effect as water goes into a 3.00-cm-diameter nozzle from a 9.00-cm-diameter fire hose while carrying a flow of 40.0 L/s? (b) To what maximum height above the nozzle can this water rise? (The actual height will be significantly smaller due to air resistance.)

(a) Using Bernoulli’s equation, show that the measured fluid speed v for a pitot tube, like the one in Figure(b), is given by [latex]v={(\frac{2{\rho }^{\prime }gh}{\rho })}^{1\text{/}2}[/latex], where h is the height of the manometer fluid, [latex]{\rho }^{\prime }[/latex] is the density of the manometer fluid, [latex]\rho[/latex] is the density of the moving fluid, and g is the acceleration due to gravity. (Note that v is indeed proportional to the square root of h, as stated in the text.) (b) Calculate v for moving air if a mercury manometer’s h is 0.200 m.

A container of water has a cross-sectional area of [latex]A=0.1\,{\text{m}}^{2}[/latex]. A piston sits on top of the water (see the following figure). There is a spout located 0.15 m from the bottom of the tank, open to the atmosphere, and a stream of water exits the spout. The cross sectional area of the spout is [latex]{A}_{\text{s}}=7.0\times {10}^{-4}{\text{m}}^{2}[/latex]. (a) What is the velocity of the water as it leaves the spout? (b) If the opening of the spout is located 1.5 m above the ground, how far from the spout does the water hit the floor? Ignore all friction and dissipative forces. 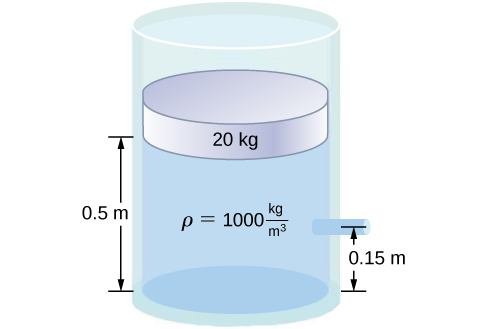 Bernoulli’s equation
equation resulting from applying conservation of energy to an incompressible frictionless fluid: [latex]p+\frac{1}{2}\rho {v}^{2}+\rho gh=\text{constant},[/latex] throughout the fluid