Interference is the hallmark of waves, all of which exhibit constructive and destructive interference exactly analogous to that seen for water waves. In fact, one way to prove something “is a wave” is to observe interference effects. Since sound is a wave, we expect it to exhibit interference.

One way for two identical waves that are initially in phase to become out of phase with one another is to have the waves travel different distances; that is, they have different path lengths. Sound waves provide an excellent example of a phase shift due to a path difference. As we have discussed, sound waves can basically be modeled as longitudinal waves, where the molecules of the medium oscillate around an equilibrium position, or as pressure waves.

the waves are in phase and there is constructive interference. When the difference in path lengths is an odd multiple of a half wavelength,

the waves are [latex]180^\circ(\pi \,\text{rad})[/latex] out of phase and the result is destructive interference. These points can be located with a sound-level intensity meter.

Two speakers are separated by 5.00 m and are being driven by a signal generator at an unknown frequency. A student with a sound-level meter walks out 6.00 m and down 2.00 m, and finds the first minimum intensity, as shown below. What is the frequency supplied by the signal generator? Assume the wave speed of sound is [latex]v=343.00\,\text{m/s}\text{.}[/latex] 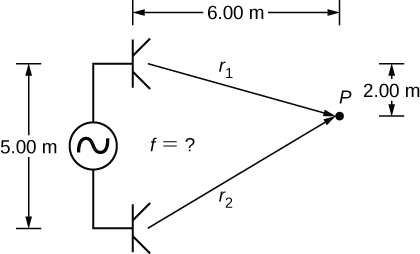 The wave velocity is equal to [latex]v=\frac{\lambda }{T}=\lambda f.[/latex] The frequency is then [latex]f=\frac{v}{\lambda }.[/latex] A minimum intensity indicates destructive interference and the first such point occurs where there is path difference of [latex]\Delta r=\lambda \text{/}2,[/latex] which can be found from the geometry.

If point P were a point of maximum intensity, then the path length would be an integer multiple of the wavelength.

If you walk around two speakers playing music, how come you do not notice places where the music is very loud or very soft, that is, where there is constructive and destructive interference?

In the example, the two speakers were producing sound at a single frequency. Music has various frequencies and wavelengths.

The concept of a phase shift due to a difference in path length is very important. You will use this concept again in Interference in the second volume of the text and Photons and Matter Waves in the third, where we discuss how Thomas Young used this method in his famous double-slit experiment to provide evidence that light has wavelike properties.

Figure shows a clever use of sound interference to cancel noise. Larger-scale applications of active noise reduction by destructive interference have been proposed for entire passenger compartments in commercial aircraft. To obtain destructive interference, a fast electronic analysis is performed, and a second sound is introduced [latex]180^\circ[/latex] out of phase with the original sound, with its maxima and minima exactly reversed from the incoming noise. Sound waves in fluids are pressure waves and are consistent with Pascal’s principle; that is, pressures from two different sources add and subtract like simple numbers. Therefore, positive and negative gauge pressures add to a much smaller pressure, producing a lower-intensity sound. Although completely destructive interference is possible only under the simplest conditions, it is possible to reduce noise levels by 30 dB or more using this technique.

Describe how noise-canceling headphones differ from standard headphones used to block outside sounds.

Regular headphones only block sound waves with a physical barrier. Noise-canceling headphones use destructive interference to reduce the loudness of outside sounds.

Resonance in a Tube Closed at one End

When these two waves interfere, the resultant wave is a standing wave:

Suppose we have a tube that is closed at one end and open at the other. If we hold a vibrating tuning fork near the open end of the tube, an incident sound wave travels through the tube and reflects off the closed end. The reflected sound has the same frequency and wavelength as the incident sound wave, but is traveling in the opposite direction. At the closed end of the tube, the molecules of air have very little freedom to oscillate, and a node arises. At the open end, the molecules are free to move, and at the right frequency, an antinode occurs. Unlike the symmetrical boundary conditions for the standing waves on the string, the boundary conditions for a tube open at one end and closed at the other end are anti-symmetrical: a node at the closed end and an antinode at the open end.

If the tuning fork has just the right frequency, the air column in the tube resonates loudly, but at most frequencies it vibrates very little. This observation just means that the air column has only certain natural frequencies. Consider the lowest frequency that will cause the tube to resonate, producing a loud sound. There will be a node at the closed end and an antinode at the open end, as shown in Figure.

The standing wave formed in the tube has an antinode at the open end and a node at the closed end. The distance from a node to an antinode is one-fourth of a wavelength, and this equals the length of the tube; thus, [latex]{\lambda }_{1}=4L.[/latex] This same resonance can be produced by a vibration introduced at or near the closed end of the tube (Figure). It is best to consider this a natural vibration of the air column, independently of how it is induced.

Given that maximum air displacements are possible at the open end and none at the closed end, other shorter wavelengths can resonate in the tube, such as the one shown in Figure. Here the standing wave has three-fourths of its wavelength in the tube, or [latex]\frac{3}{4}{\lambda }_{3}=L,[/latex] so that [latex]{\lambda }_{3}=\frac{4}{3}L.[/latex] Continuing this process reveals a whole series of shorter-wavelength and higher-frequency sounds that resonate in the tube. We use specific terms for the resonances in any system. The lowest resonant frequency is called the fundamental, while all higher resonant frequencies are called overtones. All resonant frequencies are integral multiples of the fundamental, and they are collectively called harmonics. The fundamental is the first harmonic, the first overtone is the second harmonic, and so on. Figure shows the fundamental and the first three overtones (the first four harmonics) in a tube closed at one end.

Figure 17.21 Another resonance for a tube closed at one end. This standing wave has maximum air displacement at the open end and none at the closed end. The wavelength is shorter, with three-fourths [latex]\lambda \prime[/latex] equaling the length of the tube, so that [latex]\lambda \prime \,=\,4L\text{/}3[/latex]. This higher-frequency vibration is the first overtone.

Now let us look for a pattern in the resonant frequencies for a simple tube that is closed at one end. The fundamental has [latex]\lambda =4L,[/latex] and frequency is related to wavelength and the speed of sound as given by

Solving for f in this equation gives

where v is the speed of sound in air. Similarly, the first overtone has [latex]\lambda =4L\text{/}3[/latex] (see Figure), so that

Because [latex]{f}_{3}=3{f}_{1},[/latex] we call the first overtone the third harmonic. Continuing this process, we see a pattern that can be generalized in a single expression. The resonant frequencies of a tube closed at one end are

where [latex]{f}_{1}[/latex] is the fundamental, [latex]{f}_{3}[/latex] is the first overtone, and so on. It is interesting that the resonant frequencies depend on the speed of sound and, hence, on temperature. This dependence poses a noticeable problem for organs in old unheated cathedrals, and it is also the reason why musicians commonly bring their wind instruments to room temperature before playing them.

Resonance in a Tube Open at Both Ends

Note that a tube open at both ends has symmetrical boundary conditions, similar to the string fixed at both ends discussed in Waves. The relationships for the wavelengths and frequencies of a stringed instrument are the same as given in (Equation) and (Equation). The speed of the wave on the string (from Waves) is [latex]v=\sqrt{\frac{{F}_{T}}{\mu }}.[/latex] The air around the string vibrates at the same frequency as the string, producing sound of the same frequency. The sound wave moves at the speed of sound and the wavelength can be found using [latex]v=\lambda f.[/latex]

How is it possible to use a standing wave’s node and antinode to determine the length of a closed-end tube?

You observe two musical instruments that you cannot identify. One plays high-pitched sounds and the other plays low-pitched sounds. How could you determine which is which without hearing either of them play?

You are given two wind instruments of identical length. One is open at both ends, whereas the other is closed at one end. Which is able to produce the lowest frequency?

What is the difference between an overtone and a harmonic? Are all harmonics overtones? Are all overtones harmonics?

What is the length of a tube that has a fundamental frequency of 176 Hz and a first overtone of 352 Hz if the speed of sound is 343 m/s?

The ear canal resonates like a tube closed at one end. (See [link]Figure 17_03_HumEar[/link].) If ear canals range in length from 1.80 to 2.60 cm in an average population, what is the range of fundamental resonant frequencies? Take air temperature to be [latex]37.0^\circ\text{C,}[/latex] which is the same as body temperature.

Calculate the first overtone in an ear canal, which resonates like a 2.40-cm-long tube closed at one end, by taking air temperature to be [latex]37.0^\circ\text{C}[/latex]. Is the ear particularly sensitive to such a frequency? (The resonances of the ear canal are complicated by its nonuniform shape, which we shall ignore.)

A crude approximation of voice production is to consider the breathing passages and mouth to be a resonating tube closed at one end. (a) What is the fundamental frequency if the tube is 0.240 m long, by taking air temperature to be [latex]37.0^\circ\text{C}[/latex]? (b) What would this frequency become if the person replaced the air with helium? Assume the same temperature dependence for helium as for air.

A 4.0-m-long pipe, open at one end and closed at one end, is in a room where the temperature is [latex]T=22^\circ\text{C}\text{.}[/latex] A speaker capable of producing variable frequencies is placed at the open end and is used to cause the tube to resonate. (a) What is the wavelength and the frequency of the fundamental frequency? (b) What is the frequency and wavelength of the first overtone?

A 4.0-m-long pipe, open at both ends, is placed in a room where the temperature is[latex]T=25^\circ\text{C}\text{.}[/latex] A speaker capable of producing variable frequencies is placed at the open end and is used to cause the tube to resonate. (a) What are the wavelength and the frequency of the fundamental frequency? (b) What are the frequency and wavelength of the first overtone?

A nylon guitar string is fixed between two lab posts 2.00 m apart. The string has a linear mass density of [latex]\mu =7.20\,\text{g/m}[/latex] and is placed under a tension of 160.00 N. The string is placed next to a tube, open at both ends, of length L. The string is plucked and the tube resonates at the [latex]n=3[/latex] mode. The speed of sound is 343 m/s. What is the length of the tube?

Students in a physics lab are asked to find the length of an air column in a tube closed at one end that has a fundamental frequency of 256 Hz. They hold the tube vertically and fill it with water to the top, then lower the water while a 256-Hz tuning fork is rung and listen for the first resonance. (a) What is the air temperature if the resonance occurs for a length of 0.336 m? (b) At what length will they observe the second resonance (first overtone)?

overtones
all resonant frequencies higher than the fundamental

17.4 Normal Modes of a Standing Sound Wave Copyright © 2016 by OpenStax. All Rights Reserved.