Now we deal with the case where the mass of an object is changing. We analyze the motion of a rocket, which changes its velocity (and hence its momentum) by ejecting burned fuel gases, thus causing it to accelerate in the opposite direction of the velocity of the ejected fuel (see Figure). Specifically: A fully fueled rocket ship in deep space has a total mass [latex]{m}_{0}[/latex] (this mass includes the initial mass of the fuel). At some moment in time, the rocket has a velocity [latex]\mathbf{\overset{\to }{v}}[/latex] and mass m; this mass is a combination of the mass of the empty rocket and the mass of the remaining unburned fuel it contains. (We refer to m as the “instantaneous mass” and [latex]\mathbf{\overset{\to }{v}}[/latex] as the “instantaneous velocity.”) The rocket accelerates by burning the fuel it carries and ejecting the burned exhaust gases. If the burn rate of the fuel is constant, and the velocity at which the exhaust is ejected is also constant, what is the change of velocity of the rocket as a result of burning all of its fuel?

Here’s a description of what happens, so that you get a feel for the physics involved.

The problem has the mass and velocity of the rocket changing; also, the total mass of ejected gases is changing. If we define our system to be the rocket + fuel, then this is a closed system (since the rocket is in deep space, there are no external forces acting on this system); as a result, momentum is conserved for this system. Thus, we can apply conservation of momentum to answer the question (Figure).

At the same moment that the total instantaneous rocket mass is m (i.e., m is the mass of the rocket body plus the mass of the fuel at that point in time), we define the rocket’s instantaneous velocity to be [latex]\mathbf{\overset{\to }{v}}=v\mathbf{\hat{i}}[/latex] (in the +x-direction); this velocity is measured relative to an inertial reference system (the Earth, for example). Thus, the initial momentum of the system is

Since all vectors are in the x-direction, we drop the vector notation. Applying conservation of momentum, we obtain

Now, [latex]d{m}_{g}[/latex] and dv are each very small; thus, their product [latex]d{m}_{g}dv[/latex] is very, very small, much smaller than the other two terms in this expression. We neglect this term, therefore, and obtain:

Our next step is to remember that, since [latex]d{m}_{g}[/latex] represents an increase in the mass of ejected gases, it must also represent a decrease of mass of the rocket:

Replacing this, we have

Integrating from the initial mass mi to the final mass m of the rocket gives us the result we are after:

and thus our final answer is

This result is called the rocket equation. It was originally derived by the Soviet physicist Konstantin Tsiolkovsky in 1897. It gives us the change of velocity that the rocket obtains from burning a mass of fuel that decreases the total rocket mass from [latex]{m}_{0}[/latex] down to m. As expected, the relationship between [latex]\Delta v[/latex] and the change of mass of the rocket is nonlinear.

In rocket problems, the most common questions are finding the change of velocity due to burning some amount of fuel for some amount of time; or to determine the acceleration that results from burning fuel.

Thrust on a Spacecraft

Notice that the acceleration is not constant; as a result, any dynamical quantities must be calculated either using integrals, or (more easily) conservation of total energy.

Rocket in a Gravitational Field

Let’s now analyze the velocity change of the rocket during the launch phase, from the surface of Earth. To keep the math manageable, we’ll restrict our attention to distances for which the acceleration caused by gravity can be treated as a constant g.

where we have again neglected the term [latex]d{m}_{g}dv[/latex] and dropped the vector notation. Next we replace [latex]d{m}_{g}[/latex] with [latex]\text{−}dm[/latex]:

Dividing through by m gives

and integrating, we have

Unsurprisingly, the rocket’s velocity is affected by the (constant) acceleration of gravity.

It is possible for the velocity of a rocket to be greater than the exhaust velocity of the gases it ejects. When that is the case, the gas velocity and gas momentum are in the same direction as that of the rocket. How is the rocket still able to obtain thrust by ejecting the gases?

(b) How much energy is lost to work done against friction?

Repeat the preceding problem but for a rocket that takes off from a space station, where there is no gravity other than the negligible gravity due to the space station.

Unreasonable Results Squids have been reported to jump from the ocean and travel 30.0 m (measured horizontally) before re-entering the water.

(a) Calculate the initial speed of the squid if it leaves the water at an angle of 20.0°, assuming negligible lift from the air and negligible air resistance.

(c) What is unreasonable about the results?

(d) Which premise is unreasonable, or which premises are inconsistent?

A driver applies the brakes and reduces the speed of her car by 20%, without changing the direction in which the car is moving. By how much does the car’s momentum change?

You friend claims that momentum is mass multiplied by velocity, so things with more mass have more momentum. Do you agree? Explain.

Dropping a glass on a cement floor is more likely to break the glass than if it is dropped from the same height on a grass lawn. Explain in terms of the impulse.

Your 1500-kg sports car accelerates from 0 to 30 m/s in 10 s. What average force is exerted on it during this acceleration?

A ball of mass [latex]m[/latex] is dropped. What is the formula for the impulse exerted on the ball from the instant it is dropped to an arbitrary time [latex]\tau[/latex] later? Ignore air resistance.

A 5.0-g egg falls from a 90-cm-high counter onto the floor and breaks. What impulse is exerted by the floor on the egg?

You are coasting on your 10-kg bicycle at 15 m/s and a 5.0-g bug splatters on your helmet. The bug was initially moving at 2.0 m/s in the same direction as you. If your mass is 60 kg, (a) what is the initial momentum of you plus your bicycle? (b) What is the initial momentum of the bug? (c) What is your change in velocity due to the collision with the bug? (d) What would the change in velocity have been if the bug were traveling in the opposite direction?

A load of gravel is dumped straight down into a 30 000-kg freight car coasting at 2.2 m/s on a straight section of a railroad. If the freight car’s speed after receiving the gravel is 1.5 m/s, what mass of gravel did it receive?

Repeat the preceding problem for the case when the initial speed of the second object is nonzero.

A child sleds down a hill and collides at 5.6 m/s into a stationary sled that is identical to his. The child is launched forward at the same speed, leaving behind the two sleds that lock together and slide forward more slowly. What is the speed of the two sleds after this collision?

For the preceding problem, find the final speed of each sled for the case of an elastic collision.

A 90-kg football player jumps vertically into the air to catch a 0.50-kg football that is thrown essentially horizontally at him at 17 m/s. What is his horizontal speed after catching the ball?

Three skydivers are plummeting earthward. They are initially holding onto each other, but then push apart. Two skydivers of mass 70 and 80 kg gain horizontal velocities of 1.2 m/s north and 1.4 m/s southeast, respectively. What is the horizontal velocity of the third skydiver, whose mass is 55 kg?

Two billiard balls are at rest and touching each other on a pool table. The cue ball travels at 3.8 m/s along the line of symmetry between these balls and strikes them simultaneously. If the collision is elastic, what is the velocity of the three balls after the collision?

Where is the center of mass of a semicircular wire of radius R that is centered on the origin, begins and ends on the x axis, and lies in the x,y plane?

Where is the center of mass of a slice of pizza that was cut into eight equal slices? Assume the origin is at the apex of the slice and measure angles with respect to an edge of the slice. The radius of the pizza is R.

You friend wonders how a rocket continues to climb into the sky once it is sufficiently high above the surface of Earth so that its expelled gasses no longer push on the surface. How do you respond?

To increase the acceleration of a rocket, should you throw rocks out of the front window of the rocket or out of the back window?

A 65-kg person jumps from the first floor window of a burning building and lands almost vertically on the ground with a horizontal velocity of 3 m/s and vertical velocity of [latex]-9\,\text{m/s}[/latex]. Upon impact with the ground he is brought to rest in a short time. The force experienced by his feet depends on whether he keeps his knees stiff or bends them. Find the force on his feet in each case.

You will need to find the time the impact lasts by making reasonable assumptions about the deceleration. Although the force is not constant during the impact, working with constant average force for this problem is acceptable.

Two projectiles of mass [latex]{m}_{1}[/latex] and [latex]{m}_{2}[/latex] are ﬁred at the same speed but in opposite directions from two launch sites separated by a distance D. They both reach the same spot in their highest point and strike there. As a result of the impact they stick together and move as a single body afterwards. Find the place they will land.

Two identical objects (such as billiard balls) have a one-dimensional collision in which one is initially motionless. After the collision, the moving object is stationary and the other moves with the same speed as the other originally had. Show that both momentum and kinetic energy are conserved.

A ramp of mass M is at rest on a horizontal surface. A small cart of mass m is placed at the top of the ramp and released. 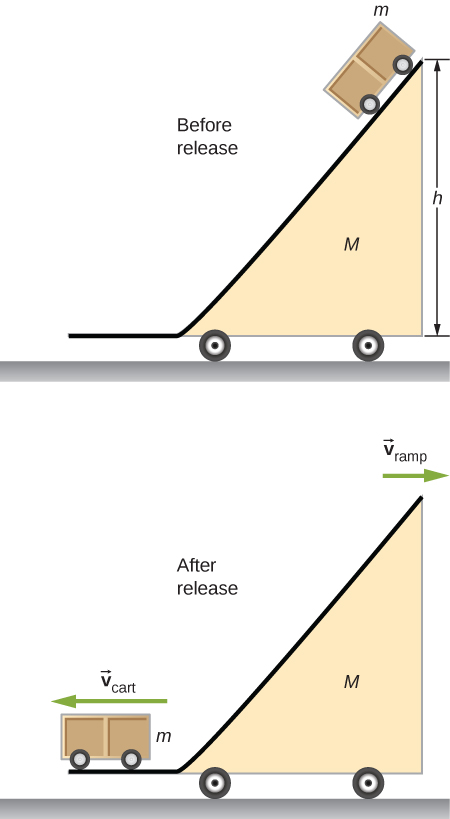 What are the velocities of the ramp and the cart relative to the ground at the instant the cart leaves the ramp?

Find the center of mass of the structure given in the figure below. Assume a uniform thickness of 20 cm, and a uniform density of [latex]1{\,\text{g/cm}}^{3}.[/latex] 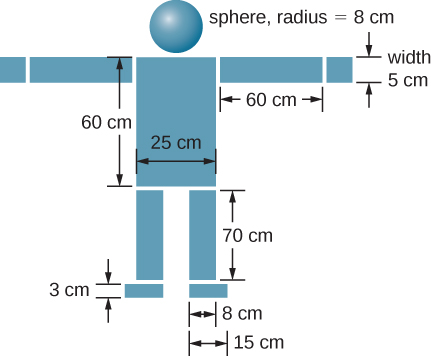 rocket equation
derived by the Soviet physicist Konstantin Tsiolkovsky in 1897, it gives us the change of velocity that the rocket obtains from burning a mass of fuel that decreases the total rocket mass from [latex]{m}_{\text{i}}[/latex] down to m