With the advent of motion picture newsreels and voice recordings in the 1920s, presidents began to broadcast their message to the general public. Franklin Roosevelt, while not the first president to use the radio, adopted this technology to great effect. Over time, as radio gave way to newer and more powerful technologies like television, the Internet, and social media, other presidents have been able magnify their voices to an even-larger degree. Presidents now have far more tools at their disposal to shape public opinion and build support for policies. However, the choice to “go public” does not always lead to political success; it is difficult to convert popularity in public opinion polls into political power. Moreover, the modern era of information and social media empowers opponents at the same time that it provides opportunities for presidents.

THE SHAPING OF THE MODERN PRESIDENCY

From the days of the early republic through the end of the nineteenth century, presidents were limited in the ways they could reach the public to convey their perspective and shape policy. Inaugural addresses and messages to Congress, while circulated in newspapers, proved clumsy devices to attract support, even when a president used plain, blunt language. Some presidents undertook tours of the nation, notably George Washington and Rutherford B. Hayes. Others promoted good relationships with newspaper editors and reporters, sometimes going so far as to sanction a pro-administration newspaper. One president, Ulysses S. Grant, cultivated political cartoonist Thomas Nast to present the president’s perspective in the pages of the magazine Harper’s Weekly.[1]

Abraham Lincoln experimented with public meetings recorded by newspaper reporters and public letters that would appear in the press, sometimes after being read at public gatherings ((Figure)). Most presidents gave speeches, although few proved to have much immediate impact, including Lincoln’s memorable Gettysburg Address. 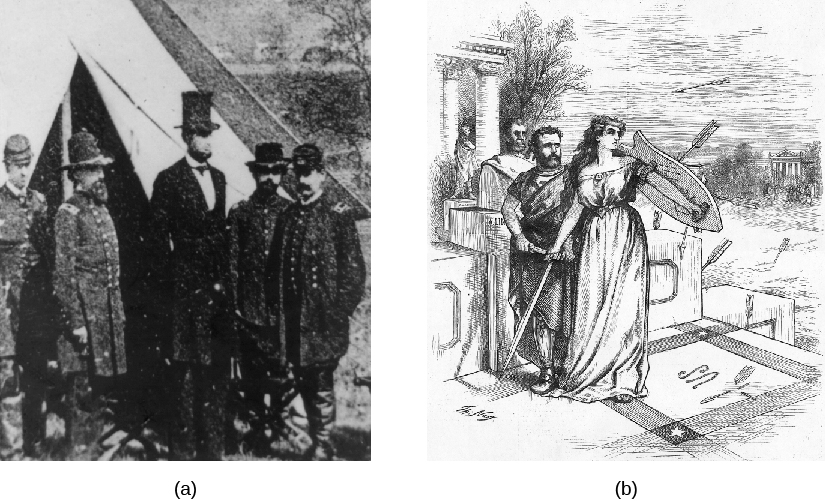 Figure 1. While President Abraham Lincoln was not the first president to be photographed, he was the first to use the relatively new power of photography to enhance his power as president and commander-in-chief. Here, Lincoln poses with Union soldiers (a) during his visit to Antietam, Maryland, on October 3, 1862. President Ulysses S. Grant cultivated a relationship with popular cartoonist Thomas Nast, who often depicted the president in the company of “Lady Liberty” (b) in addition to relentlessly attacking his opponent Horace Greeley.

Rather, most presidents exercised the power of patronage (or appointing people who are loyal and help them out politically) and private deal-making to get what they wanted at a time when Congress usually held the upper hand in such transactions. But even that presidential power began to decline with the emergence of civil service reform in the later nineteenth century, which led to most government officials being hired on their merit instead of through patronage. Only when it came to diplomacy and war were presidents able to exercise authority on their own, and even then, institutional as well as political restraints limited their independence of action.

Theodore Roosevelt came to the presidency in 1901, at a time when movie newsreels were becoming popular. Roosevelt, who had always excelled at cultivating good relationships with the print media, eagerly exploited this new opportunity as he took his case to the people with the concept of the presidency as bully pulpit, a platform from which to push his agenda to the public. His successors followed suit, and they discovered and employed new ways of transmitting their message to the people in an effort to gain public support for policy initiatives. With the popularization of radio in the early twentieth century, it became possible to broadcast the president’s voice into many of the nation’s homes. Most famously, FDR used the radio to broadcast his thirty “fireside chats” to the nation between 1933 and 1944.

In the post–World War II era, television began to replace radio as the medium through which presidents reached the public. This technology enhanced the reach of the handsome young president John F. Kennedy and the trained actor Ronald Reagan. At the turn of the twentieth century, the new technology was the Internet. The extent to which this mass media technology can enhance the power and reach of the president has yet to be fully realized.

Other presidents have used advances in transportation to take their case to the people. Woodrow Wilson traveled the country to advocate formation of the League of Nations. However, he fell short of his goal when he suffered a stroke in 1919 and cut his tour short. Both Franklin Roosevelt in the 1930s and 1940s and Harry S. Truman in the 1940s and 1950s used air travel to conduct diplomatic and military business. Under President Dwight D. Eisenhower, a specific plane, commonly called Air Force One, began carrying the president around the country and the world. This gives the president the ability to take his or her message directly to the far corners of the nation at any time.

The concept of going public involves the president delivering a major television address in the hope that Americans watching the address will be compelled to contact their House and Senate member and that such public pressure will result in the legislators supporting the president on a major piece of legislation. Technological advances have made it more efficient for presidents to take their messages directly to the people than was the case before mass media ((Figure)). Presidential visits can build support for policy initiatives or serve political purposes, helping the president reward supporters, campaign for candidates, and seek reelection. It remains an open question, however, whether choosing to go public actually enhances a president’s political position in battles with Congress. Political scientist George C. Edwards goes so far as to argue that taking a president’s position public serves to polarize political debate, increase public opposition to the president, and complicate the chances to get something done. It replaces deliberation and compromise with confrontation and campaigning. Edwards believes the best way for presidents to achieve change is to keep issues private and negotiate resolutions that preclude partisan combat. Going public may be more effective in rallying supporters than in gaining additional support or changing minds.[2] 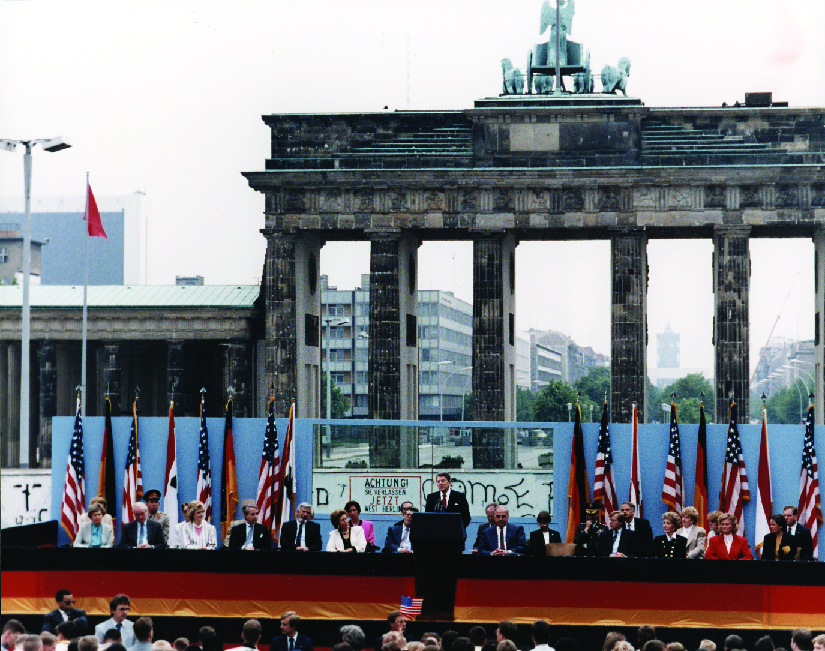 Figure 2. With the advent of video technology and cable television, the power of the president to reach huge audiences increased exponentially. President Ronald Reagan, shown here giving one of his most famous speeches in Berlin, was an expert at using technology to help mold and project his presidential image to the public. His training as an actor certainly helped in this regard.

Today, it is possible for the White House to take its case directly to the people via websites like White House Live, where the public can watch live press briefings and speeches.

THE FIRST LADY: A SECRET WEAPON?

The president is not the only member of the First Family who often attempts to advance an agenda by going public. First ladies increasingly exploited the opportunity to gain public support for an issue of deep interest to them. Before 1933, most first ladies served as private political advisers to their husbands. In the 1910s, Edith Bolling Wilson took a more active but still private role assisting her husband, President Woodrow Wilson, afflicted by a stroke, in the last years of his presidency. However, as the niece of one president and the wife of another, it was Eleanor Roosevelt in the 1930s and 1940s who opened the door for first ladies to do something more.

Eleanor Roosevelt took an active role in championing civil rights, becoming in some ways a bridge between her husband and the civil rights movement. She coordinated meetings between FDR and members of the NAACP, championed antilynching legislation, openly defied segregation laws, and pushed the Army Nurse Corps to allow black women in its ranks. She also wrote a newspaper column and had a weekly radio show. Her immediate successors returned to the less visible role held by her predecessors, although in the early 1960s, Jacqueline Kennedy gained attention for her efforts to refurbish the White House along historical lines, and Lady Bird Johnson in the mid- and late 1960s endorsed an effort to beautify public spaces and highways in the United States. She also established the foundations of what came to be known as the Office of the First Lady, complete with a news reporter, Liz Carpenter, as her press secretary.

Betty Ford took over as first lady in 1974 and became an avid advocate of women’s rights, proclaiming that she was pro-choice when it came to abortion and lobbying for the ratification of the Equal Rights Amendment (ERA). She shared with the public the news of her breast cancer diagnosis and subsequent mastectomy. Her successor, Rosalynn Carter, attended several cabinet meetings and pushed for the ratification of the ERA as well as for legislation addressing mental health issues ((Figure)). 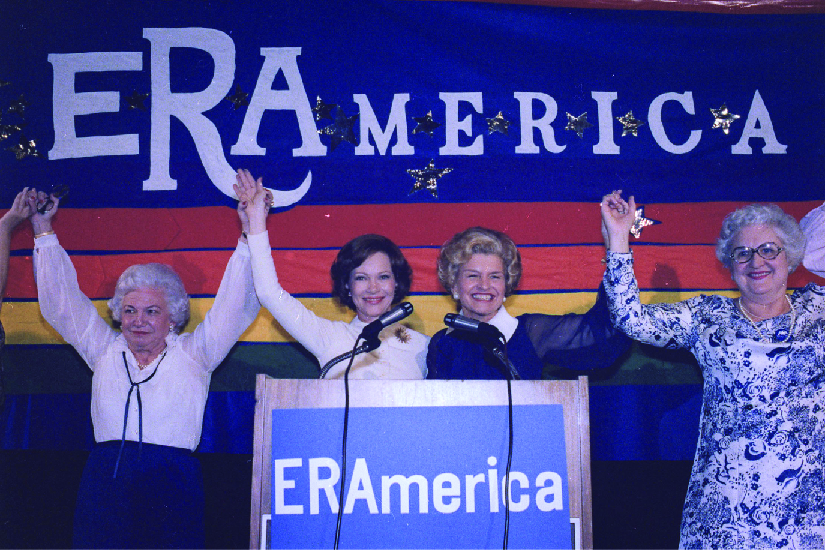 Figure 3. On November 19, 1977, Rosalynn Carter (center left) and Betty Ford (center right) attended a rally in favor of the passage of the Equal Rights Amendment.

The increasing public political role of the first lady continued in the 1980s with Nancy Reagan’s “Just Say No” antidrug campaign and in the early 1990s with Barbara Bush’s efforts on behalf of literacy. The public role of the first lady reach a new level with Hillary Clinton in the 1990s when her husband put her in charge of his efforts to achieve health care reform, a controversial decision that did not meet with political success. Her successors, Laura Bush in the first decade of the twenty-first century and Michelle Obama in the second, returned to the roles played by predecessors in advocating less controversial policies: Laura Bush advocated literacy and education, while Michelle Obama has emphasized physical fitness and healthy diet and exercise. Nevertheless, the public and political profiles of first ladies remain high, and in the future, the president’s spouse will have the opportunity to use that unelected position to advance policies that might well be less controversial and more appealing than those pushed by the president.

Despite the obvious fact that the president is the head of state, the U.S. Constitution actually empowers the occupant of the White House with very little authority. Apart from the president’s war powers, the office holder’s real advantage is the ability to speak to the nation with one voice. Technological changes in the twentieth century have greatly expanded the power of the presidential bully pulpit. The twentieth century also saw a string of more public first ladies. Women like Eleanor Roosevelt and Lady Bird Johnson greatly expanded the power of the first lady’s role, although first ladies who have undertaken more nontraditional roles have encountered significant criticism.