The national government’s ability to achieve its objectives often requires the participation of state and local governments. Intergovernmental grants offer positive financial inducements to get states to work toward selected national goals. A grant is commonly likened to a “carrot” to the extent that it is designed to entice the recipient to do something. On the other hand, unfunded mandates impose federal requirements on state and local authorities. Mandates are typically backed by the threat of penalties for non-compliance and provide little to no compensation for the costs of implementation. Thus, given its coercive nature, a mandate is commonly likened to a “stick.”

The national government has used grants to influence state actions as far back as the Articles of Confederation when it provided states with land grants. In the first half of the 1800s, land grants were the primary means by which the federal government supported the states. Millions of acres of federal land were donated to support road, railroad, bridge, and canal construction projects, all of which were instrumental in piecing together a national transportation system to facilitate migration, interstate commerce, postal mail service, and movement of military people and equipment. Numerous universities and colleges across the country, such as Ohio State University and the University of Maine, are land-grant institutions because their campuses were built on land donated by the federal government. At the turn of the twentieth century, cash grants replaced land grants as the main form of federal intergovernmental transfers and have become a central part of modern federalism.[1]

Federal cash grants do come with strings attached; the national government has an interest in seeing that public monies are used for policy activities that advance national objectives. Categorical grants are federal transfers formulated to limit recipients’ discretion in the use of funds and subject them to strict administrative criteria that guide project selection, performance, and financial oversight, among other things. These grants also often require some commitment of matching funds. Medicaid and the food stamp program are examples of categorical grants. Block grants come with less stringent federal administrative conditions and provide recipients more flexibility over how to spend grant funds. Examples of block grants include the Workforce Investment Act program, which provides state and local agencies money to help youths and adults obtain skill sets that will lead to better-paying jobs, and the Surface Transportation Program, which helps state and local governments maintain and improve highways, bridges, tunnels, sidewalks, and bicycle paths. Finally, recipients of general revenue sharing faced the least restrictions on the use of federal grants. From 1972 to 1986, when revenue sharing was abolished, upwards of $85 billion of federal money was distributed to states, cities, counties, towns, and villages.[2]

During the 1960s and 1970s, funding for federal grants grew significantly, as the trend line shows in (Figure). Growth picked up again in the 1990s and 2000s. The upward slope since the 1990s is primarily due to the increase in federal grant money going to Medicaid. Federally funded health-care programs jumped from $43.8 billion in 1990 to $320 billion in 2014.[3]

Health-related grant programs such as Medicaid and the Children’s Health Insurance Program (CHIP) represented more than half of total federal grant expenses. 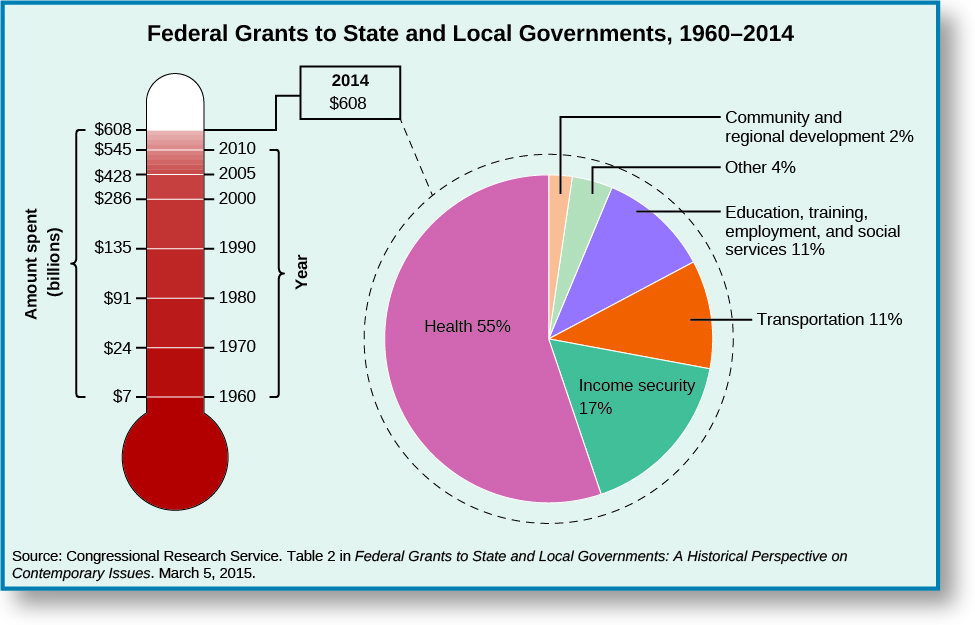 Figure 1. As the thermometer shows, federal grants to state and local governments have steadily increased since the 1960s. The pie chart shows how federal grants are allocated among different functional categories today.
The federal government uses grants and other tools to achieve its national policy priorities. Take a look at the National Priorities Project to find out more.

The national government has greatly preferred using categorical grants to transfer funds to state and local authorities because this type of grant gives them more control and discretion in how the money is spent. In 2014, the federal government distributed 1,099 grants, 1,078 of which were categorical, while only 21 were block grants.[4]

In response to the terrorist attack on the United States on September 11, 2001, more than a dozen new federal grant programs relating to homeland security were created, but as of 2011, only three were block grants.

There are a couple of reasons that categorical grants are more popular than block grants despite calls to decentralize public policy. One reason is that elected officials who sponsor these grants can take credit for their positive outcomes (e.g., clean rivers, better-performing schools, healthier children, a secure homeland) since elected officials, not state officials, formulate the administrative standards that lead to the results. Another reason is that categorical grants afford federal officials greater command over grant program performance. A common criticism leveled against block grants is that they lack mechanisms to hold state and local administrators accountable for outcomes, a reproach the Obama administration has made about the Community Services Block Grant program. Finally, once categorical grants have been established, vested interests in Congress and the federal bureaucracy seek to preserve them. The legislators who enact them and the federal agencies that implement them invest heavily in defending them, ensuring their continuation.[5]

Reagan’s “devolution revolution” contributed to raising the number of block grants from six in 1981 to fourteen in 1989. Block grants increased to twenty-four in 1999 during the Clinton administration and to twenty-six during Obama’s presidency, but by 2014 the total had dropped to twenty-one, accounting for 10 percent of total federal grant outlay.[6]

In 1994, the Republican-controlled Congress passed legislation that called for block-granting Medicaid, which would have capped federal Medicaid spending. President Clinton vetoed the legislation. However, congressional efforts to convert Aid to Families with Dependent Children (AFDC) to a block grant succeeded. The Temporary Assistance for Needy Families (TANF) block grant replaced the AFDC in 1996, marking the first time the federal government transformed an entitlement program (which guarantees individual rights to benefits) into a block grant. Under the AFDC, the federal government had reimbursed states a portion of the costs they bore for running the program without placing a ceiling on the amount. In contrast, the TANF block grant caps annual federal funding at $16.489 billion and provides a yearly lump sum to each state, which it can use to manage its own program.

Block grants have been championed for their cost-cutting effects. By eliminating uncapped federal funding, as the TANF issue illustrates, the national government can reverse the escalating costs of federal grant programs. This point has not been lost on Speaker of the House Paul Ryan (R-WI), former chair of the House Budget Committee and the House Ways and Means Committee, who has tried multiple times but without success to convert Medicaid into a block grant, a reform he estimates could save the federal government upwards of $732 billion over ten years.[7]

Another noteworthy characteristic of block grants is that their flexibility has been undermined over time as a result of creeping categorization, a process in which the national government places new administrative requirements on state and local governments or supplants block grants with new categorical grants.[8]

Among the more common measures used to restrict block grants’ programmatic flexibility are set-asides (i.e., requiring a certain share of grant funds to be designated for a specific purpose) and cost ceilings (i.e., placing a cap on funding other purposes).

Unfunded mandates are federal laws and regulations that impose obligations on state and local governments without fully compensating them for the administrative costs they incur. The federal government has used mandates increasingly since the 1960s to promote national objectives in policy areas such as the environment, civil rights, education, and homeland security. One type of mandate threatens civil and criminal penalties for state and local authorities that fail to comply with them across the board in all programs, while another provides for the suspension of federal grant money if the mandate is not followed. These types of mandates are commonly referred to as crosscutting mandates. Failure to fully comply with crosscutting mandates can result in punishments that normally include reduction of or suspension of federal grants, prosecution of officials, fines, or some combination of these penalties. If only one requirement is not met, state or local governments may not get any money at all.

For example, Title VI of the Civil Rights Act of 1964 authorizes the federal government to withhold federal grants as well as file lawsuits against state and local officials for practicing racial discrimination. Finally, some mandates come in the form of partial preemption regulations, whereby the federal government sets national regulatory standards but delegates the enforcement to state and local governments. For example, the Clean Air Act sets air quality regulations but instructs states to design implementation plans to achieve such standards (Figure).[9] 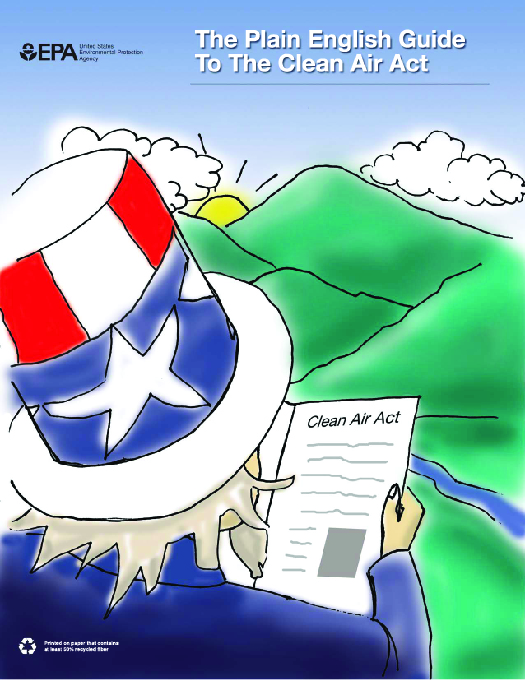 Figure 2. The Clean Air Act is an example of an unfunded mandate. The Environmental Protection Agency sets federal standards regarding air and water quality, but it is up to each state to implement plans to achieve these standards.

The widespread use of federal mandates in the 1970s and 1980s provoked a backlash among state and local authorities, which culminated in the Unfunded Mandates Reform Act (UMRA) in 1995. The UMRA’s main objective has been to restrain the national government’s use of mandates by subjecting rules that impose unfunded requirements on state and local governments to greater procedural scrutiny. However, since the act’s implementation, states and local authorities have obtained limited relief. A new piece of legislation aims to take this approach further. The 2015 Unfunded Mandates and Information Transparency Act, HR 50, passed the House early in 2015 before being referred to the Senate, where it waits committee consideration.[10]

The number of mandates has continued to rise, and some have been especially costly to states and local authorities. Consider the Real ID Act of 2005, a federal law designed to beef up homeland security. The law requires driver’s licenses and state-issued identification cards (DL/IDs) to contain standardized anti-fraud security features, specific data, and machine-readable technology. It also requires states to verify the identity of everyone being reissued DL/IDs. The Department of Homeland Security announced a phased enforcement of the law in 2013, which requires individuals to present compliant DL/IDs to board commercial airlines starting in 2016. The cost to states of re-issuing DL/IDs, implementing new identity verification procedures, and redesigning DL/IDs is estimated to be $11 billion, and the federal government stands to reimburse only a small fraction.[11]

Compliance with the federal law has been onerous for many states; only twenty-two were in full compliance with Real ID in 2015.[12]

The continued use of unfunded mandates clearly contradicts new federalism’s call for giving states and local governments more flexibility in carrying out national goals. The temptation to use them appears to be difficult for the federal government to resist, however, as the UMRA’s poor track record illustrates. This is because mandates allow the federal government to fulfill its national priorities while passing most of the cost to the states, an especially attractive strategy for national lawmakers trying to cut federal spending.[13]

Some leading federalism scholars have used the term coercive federalism to capture this aspect of contemporary U.S. federalism.[14]

In other words, Washington has been as likely to use the stick of mandates as the carrot of grants to accomplish its national objectives. As a result, there have been more instances of confrontational interactions between the states and the federal government.