The majority of elections in the United States are held to facilitate indirect democracy. Elections allow the people to pick representatives to serve in government and make decisions on the citizens’ behalf. Representatives pass laws, implement taxes, and carry out decisions. Although direct democracy had been used in some of the colonies, the framers of the Constitution granted voters no legislative or executive powers, because they feared the masses would make poor decisions and be susceptible to whims. During the Progressive Era, however, governments began granting citizens more direct political power. States that formed and joined the United States after the Civil War often assigned their citizens some methods of directly implementing laws or removing corrupt politicians. Citizens now use these powers at the ballot to change laws and direct public policy in their states.

Direct democracy occurs when policy questions go directly to the voters for a decision. These decisions include funding, budgets, candidate removal, candidate approval, policy changes, and constitutional amendments. Not all states allow direct democracy, nor does the United States government.

Direct democracy takes many forms. It may occur locally or statewide. Local direct democracy allows citizens to propose and pass laws that affect local towns or counties. Towns in Massachusetts, for example, may choose to use town meetings, which is a meeting comprised of the town’s eligible voters, to make decisions on budgets, salaries, and local laws.[1]

To learn more about what type of direct democracy is practiced in your state, visit the University of Southern California’s Initiative & Referendum Institute. This site also allows you to look up initiatives and measures that have appeared on state ballots. 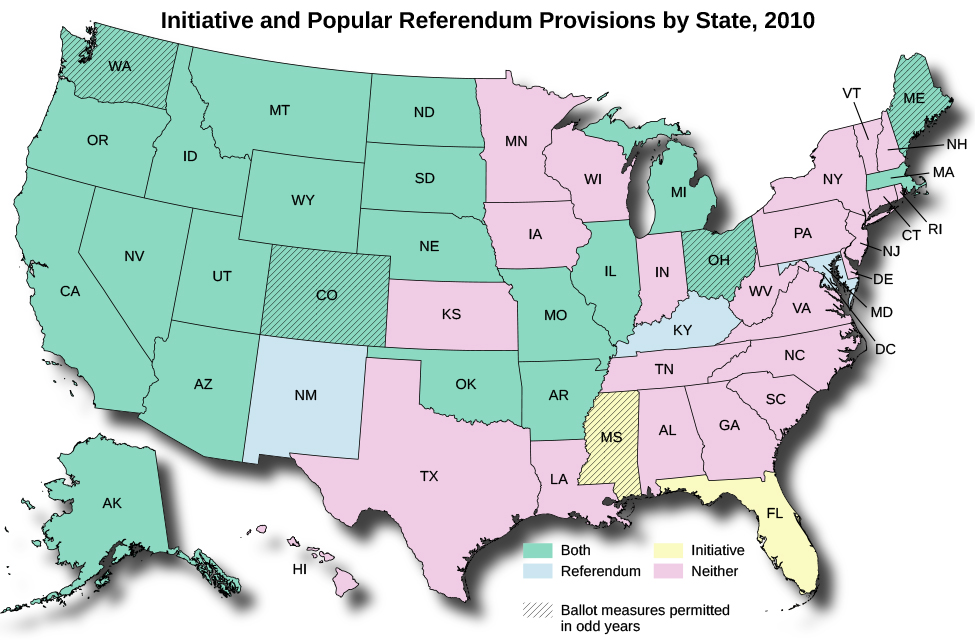 Figure 1. This map shows which states allow citizens to place laws and amendments on the ballot for voter approval or repeal.

There are three forms of direct democracy used in the United States. A referendum asks citizens to confirm or repeal a decision made by the government. A legislative referendum occurs when a legislature passes a law or a series of constitutional amendments and presents them to the voters to ratify with a yes or no vote. A judicial appointment to a state supreme court may require voters to confirm whether the judge should remain on the bench. Popular referendums occur when citizens petition to place a referendum on a ballot to repeal legislation enacted by their state government. This form of direct democracy gives citizens a limited amount of power, but it does not allow them to overhaul policy or circumvent the government.

The most common form of direct democracy is the initiative, or proposition. An initiative is normally a law or constitutional amendment proposed and passed by the citizens of a state. Initiatives completely bypass the legislatures and governor, but they are subject to review by the state courts if they are not consistent with the state or national constitution. The process to pass an initiative is not easy and varies from state to state. Most states require that a petitioner or the organizers supporting an initiative file paperwork with the state and include the proposed text of the initiative. This allows the state or local office to determine whether the measure is legal, as well as estimate the cost of implementing it. This approval may come at the beginning of the process or after organizers have collected signatures. The initiative may be reviewed by the state attorney general, as in Oregon’s procedures, or by another state official or office. In Utah, the lieutenant governor reviews measures to ensure they are constitutional.

Next, organizers gather registered voters’ signatures on a petition. The number of signatures required is often a percentage of the number of votes from a past election. In California, for example, the required numbers are 5 percent (law) and 8 percent (amendment) of the votes in the last gubernatorial election. This means through 2018, it will take 365,880 signatures to place a law on the ballot and 585,407 to place a constitutional amendment on the ballot.[2]

Once the petition has enough signatures from registered voters, it is approved by a state agency or the secretary of state for placement on the ballot. Signatures are verified by the state or a county elections office to ensure the signatures are valid. If the petition is approved, the initiative is then placed on the next ballot, and the organization campaigns to voters.

While the process is relatively clear, each step can take a lot of time and effort. First, most states place a time limit on the signature collection period. Organizations may have only 150 days to collect signatures, as in California, or as long as two years, as in Arizona. For larger states, the time limit may pose a dilemma if the organization is trying to collect more than 500,000 signatures from registered voters. Second, the state may limit who may circulate the petition and collect signatures. Some states, like Colorado, restrict what a signature collector may earn, while Oregon bans payments to signature-collecting groups. And the minimum number of signatures required affects the number of ballot measures. Arizona had more than sixty ballot measures on the 2000 general election ballot, because the state requires so few signatures to get an initiative on the ballot. Oklahomans see far fewer ballot measures because the number of required signatures is higher.

Another consideration is that, as we’ve seen, voters in primaries are more ideological and more likely to research the issues. Measures that are complex or require a lot of research, such as a lend-lease bond or changes in the state’s eminent-domain language, may do better on a primary ballot. Measures that deal with social policy, such as laws preventing animal cruelty, may do better on a general election ballot, when more of the general population comes out to vote. Proponents for the amendments or laws will take this into consideration as they plan.

Finally, the recall is one of the more unusual forms of direct democracy; it allows voters to decide whether to remove a government official from office. All states have ways to remove officials, but removal by voters is less common. The recall of California Governor Gray Davis in 2003 and his replacement by Arnold Schwarzenegger is perhaps one of the more famous such recalls. The recent attempt by voters in Wisconsin to recall Governor Scott Walker show how contentious and expensive a recall can be. Walker spent over $60 million in the election to retain his seat.[3]

Politicians are often unwilling to wade into highly political waters if they fear it will harm their chances for reelection. When a legislature refuses to act or change current policy, initiatives allow citizens to take part in the policy process and end the impasse. In Colorado, Amendment 64 allowed the recreational use of marijuana by adults, despite concerns that state law would then conflict with national law. Colorado and Washington’s legalization of recreational marijuana use started a trend, leading to more states adopting similar laws.

Direct democracy has drawbacks, however. One is that it requires more of voters. Instead of voting based on party, the voter is expected to read and become informed to make smart decisions. Initiatives can fundamentally change a constitution or raise taxes. Recalls remove politicians from office. These are not small decisions. Most citizens, however, do not have the time to perform a lot of research before voting. Given the high number of measures on some ballots, this may explain why many citizens simply skip ballot measures they do not understand. Direct democracy ballot items regularly earn fewer votes than the choice of a governor or president.

When citizens rely on television ads, initiative titles, or advice from others in determining how to vote, they can become confused and make the wrong decisions. In 2008, Californians voted on Proposition 8, titled “Eliminates Rights of Same-Sex Couples to Marry.” A yes vote meant a voter wanted to define marriage as only between a woman and man. Even though the information was clear and the law was one of the shortest in memory, many voters were confused. Some thought of the amendment as the same-sex marriage amendment. In short, some people voted for the initiative because they thought they were voting for same-sex marriage. Others voted against it because they were against same-sex marriage.[6]

Direct democracy also opens the door to special interests funding personal projects. Any group can create an organization to spearhead an initiative or referendum. And because the cost of collecting signatures can be high in many states, signature collection may be backed by interest groups or wealthy individuals wishing to use the initiative to pass pet projects. The 2003 recall of California governor Gray Davis faced difficulties during the signature collection phase, but $2 million in donations by Representative Darrell Issa (R-CA) helped the organization attain nearly one million signatures.[7]

Many commentators argued that this example showed direct democracy is not always a process by the people, but rather a process used by the wealthy and business.

Direct democracy allows the voters in a state to write laws, amend constitutions, remove politicians from office, and approve decisions made by government. Initiatives are laws or constitutional amendments on the ballot. Referendums ask voters to approve a decision by the government. The process for ballot measures requires the collection of signatures from voters, approval of the measure by state government, and a ballot election. Recalls allow citizens to remove politicians from office. While direct democracy does give citizens a say in the policies and laws of their state, it can also be used by businesses and the wealthy to pass policy goals. Initiatives can also lead to bad policy if voters do not research the measure or misunderstand the law.

initiative
law or constitutional amendment proposed and passed by the voters and subject to review by the state courts; also called a proposition