Chapter 2: The Constitution and Its Origins

A major problem with the Articles of Confederation had been the nation’s inability to change them without the unanimous consent of all the states. The framers learned this lesson well. One of the strengths they built into the Constitution was the ability to amend it to meet the nation’s needs, reflect the changing times, and address concerns or structural elements they had not anticipated.

Since ratification in 1789, the Constitution has been amended only twenty-seven times. The first ten amendments were added in 1791. Responding to charges by Anti-Federalists that the Constitution made the national government too powerful and provided no protections for the rights of individuals, the newly elected federal government tackled the issue of guaranteeing liberties for American citizens. James Madison, a member of Congress from Virginia, took the lead in drafting nineteen potential changes to the Constitution.

Madison followed the procedure outlined in Article V that says amendments can originate from one of two sources. First, they can be proposed by Congress. Then, they must be approved by a two-thirds majority in both the House and the Senate before being sent to the states for potential ratification. States have two ways to ratify or defeat a proposed amendment. First, if three-quarters of state legislatures vote to approve an amendment, it becomes part of the Constitution. Second, if three-quarters of state-ratifying conventions support the amendment, it is ratified. A second method of proposal of an amendment allows for the petitioning of Congress by the states: Upon receiving such petitions from two-thirds of the states, Congress must call a convention for the purpose of proposing amendments, which would then be forwarded to the states for ratification by the required three-quarters. All the current constitutional amendments were created using the first method of proposal (via Congress).

Having drafted nineteen proposed amendments, Madison submitted them to Congress. Only twelve were approved by two-thirds of both the Senate and the House of Representatives and sent to the states for ratification. Of these, only ten were accepted by three-quarters of the state legislatures. In 1791, these first ten amendments were added to the Constitution and became known as the Bill of Rights.

The ability to change the Constitution has made it a flexible, living document that can respond to the nation’s changing needs and has helped it remain in effect for more than 225 years. At the same time, the framers made amending the document sufficiently difficult that it has not been changed repeatedly; only seventeen amendments have been added since the ratification of the first ten (one of these, the Twenty-Seventh Amendment, was among Madison’s rejected nine proposals).

The Bill of Rights was intended to quiet the fears of Anti-Federalists that the Constitution did not adequately protect individual liberties and thus encourage their support of the new national government. Many of these first ten amendments were based on provisions of the English Bill of Rights and the Virginia Declaration of Rights. For example, the right to bear arms for protection (Second Amendment), the right not to have to provide shelter and provision for soldiers in peacetime (Third Amendment), the right to a trial by jury (Sixth and Seventh Amendments), and protection from excessive fines and from cruel and unusual punishment (Eighth Amendment) are taken from the English Bill of Rights. The Fifth Amendment, which requires among other things that people cannot be deprived of their life, liberty, or property except by a legal proceeding, was also greatly influenced by English law as well as the protections granted to Virginians in the Virginia Declaration of Rights.

Learn more about the formal process of amending the Constitution and view exhibits related to the passage of specific amendments at the National Archives website.

Other liberties, however, do not derive from British precedents. The protections for religion, speech, the press, and assembly that are granted by the First Amendment did not exist under English law. (The right to petition the government did, however.) The prohibition in the First Amendment against the establishment of an official church by the federal government differed significantly from both English precedent and the practice of several states that had official churches. The Fourth Amendment, which protects Americans from unwarranted search and seizure of their property, was also new.

The Ninth and Tenth Amendments were intended to provide yet another assurance that people’s rights would be protected and that the federal government would not become too powerful. The Ninth Amendment guarantees that liberties extend beyond those described in the preceding documents. This was an important acknowledgment that the protected rights were extensive, and the government should not attempt to interfere with them. The Supreme Court, for example, has held that the Ninth Amendment protects the right to privacy even though none of the preceding amendments explicitly mentions this right. The Tenth Amendment, one of the first submitted to the states for ratification, ensures that states possess all powers not explicitly assigned to the federal government by the Constitution. This guarantee protects states’ reserved powers to regulate such things as marriage, divorce, and intrastate transportation and commerce, and to pass laws affecting education and public health and safety.

Of the later amendments only one, the Twenty-First, repealed another amendment, the Eighteenth, which had prohibited the manufacture, import, export, distribution, transportation, and sale of alcoholic beverages. Other amendments rectify problems that have arisen over the years or that reflect changing times. For example, the Seventeenth Amendment, ratified in 1913, gave voters the right to directly elect U.S. senators. The Twentieth Amendment, which was ratified in 1933 during the Great Depression, moved the date of the presidential inauguration from March to January. In a time of crisis, like a severe economic depression, the president needed to take office almost immediately after being elected, and modern transportation allowed the new president to travel to the nation’s capital quicker than before. The Twenty-Second Amendment, added in 1955, limits the president to two terms in office, and the Twenty-Seventh Amendment, first submitted for ratification in 1789, regulates the implementation of laws regarding salary increases or decreases for members of Congress.

Of the remaining amendments, four are of especially great significance. The Thirteenth, Fourteenth, and Fifteenth Amendments, ratified at the end of the Civil War, changed the lives of African Americans who had been held in slavery. The Thirteenth Amendment abolished slavery in the United States. The Fourteenth Amendment granted citizenship to African Americans and equal protection under the law regardless of race or color. It also prohibited states from depriving their residents of life, liberty, or property without a legal proceeding. Over the years, the Fourteenth Amendment has been used to require states to protect most of the same federal freedoms granted by the Bill of Rights.

The Fifteenth and Nineteenth Amendments extended the right to vote. The Constitution had given states the power to set voting requirements, but the states had used this authority to deny women the right to vote. Most states before the 1830s had also used this authority to deny suffrage to property-less men and often to African American men as well. When states began to change property requirements for voters in the 1830s, many that had allowed free, property-owning African American men to vote restricted the suffrage to white men. The Fifteenth Amendment gave men the right to vote regardless of race or color, but women were still prohibited from voting in most states. After many years of campaigns for suffrage, as shown in (Figure), the Nineteenth Amendment finally gave women the right to vote in 1920.

Subsequent amendments further extended the suffrage. The Twenty-Third Amendment (1961) allowed residents of Washington, DC to vote for the president. The Twenty-Fourth Amendment (1964) abolished the use of poll taxes. Many southern states had used a poll tax, a tax placed on voting, to prevent poor African Americans from voting. Thus, the states could circumvent the Fifteenth Amendment; they argued that they were denying African American men and women the right to vote not because of their race but because of their inability to pay the tax. The last great extension of the suffrage occurred in 1971 in the midst of the Vietnam War. The Twenty-Sixth Amendment reduced the voting age from twenty-one to eighteen. Many people had complained that the young men who were fighting in Vietnam should have the right to vote for or against those making decisions that might literally mean life or death for them. Many other amendments have been proposed over the years, including an amendment to guarantee equal rights to women, but all have failed. 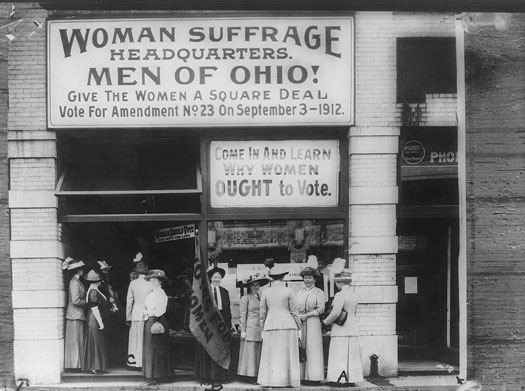 Figure 1. Suffragists encourage Ohio men to support votes for women. Before the Nineteenth Amendment was added to the Constitution in 1920, only a few western states such as Wyoming gave women the right to vote. These women seem to be attracting a primarily female audience to hear their cause.

One of the problems with the Articles of Confederation was the difficulty of changing it. To prevent this difficulty from recurring, the framers provided a method for amending the Constitution that required a two-thirds majority in both houses of Congress and in three-quarters of state legislatures to approve a change.

The possibility of amending the Constitution helped ensure its ratification, although many feared the powerful federal government it created would deprive them of their rights. To allay their anxieties, the framers promised that a Bill of Rights safeguarding individual liberties would be added following ratification. These ten amendments were formally added to the document in 1791 and other amendments followed over the years. Among the most important were those ending slavery, granting citizenship to African Americans, and giving the right to vote to Americans regardless of race, color, or sex.

Bill of Rights
the first ten amendments to the U.S. Constitution; most were designed to protect fundamental rights and liberties