Certain functions clearly belong to the federal government, the state governments, and local governments. National security is a federal matter, the issuance of licenses is a state matter, and garbage collection is a local matter. One aspect of competitive federalism today is that some policy issues, such as immigration and the marital rights of gays and lesbians, have been redefined as the roles that states and the federal government play in them have changed. Another aspect of competitive federalism is that interest groups seeking to change the status quo can take a policy issue up to the federal government or down to the states if they feel it is to their advantage. Interest groups have used this strategy to promote their views on such issues as abortion, gun control, and the legal drinking age.

Immigration federalism describes the gradual movement of states into the immigration policy domain.[1]

Since the late 1990s, states have asserted a right to make immigration policy on the grounds that they are enforcing, not supplanting, the nation’s immigration laws, and they are exercising their jurisdictional authority by restricting illegal immigrants’ access to education, health care, and welfare benefits, areas that fall under the states’ responsibilities. In 2005, twenty-five states had enacted a total of thirty-nine laws related to immigration; by 2014, forty-three states and Washington, DC, had passed a total of 288 immigration-related laws and resolutions.[2]

Arizona has been one of the states at the forefront of immigration federalism. In 2010, it passed Senate Bill 1070, which sought to make it so difficult for illegal immigrants to live in the state that they would return to their native country, a strategy referred to as “attrition by enforcement.”[3]

The federal government filed suit to block the Arizona law, contending that it conflicted with federal immigration laws. Arizona’s law has also divided society, because some groups, like the Tea Party movement, have supported its tough stance against illegal immigrants, while other groups have opposed it for humanitarian and human-rights reasons (Figure). According to a poll of Latino voters in the state by Arizona State University researchers, 81 percent opposed this bill.[4]

Figure 1. Tea Party members in St. Paul, Minnesota, protest amnesty and illegal immigration on November 14, 2009 (a). Following the adoption of Senate Bill 1070 in Arizona, which took a tough stance on illegal immigration, supporters of immigration reform demonstrated across the country in opposition to the bill, including in Lafayette Park (b), located across the street from the White House in Washington, DC. (credit a: modification of work by “Fibonacci Blue”/Flickr; credit b: modification of work by Nevele Otseog)

The court struck down three of the four central provisions of the Arizona law—namely, those allowing police officers to arrest an undocumented immigrant without a warrant if they had probable cause to think he or she had committed a crime that could lead to deportation, making it a crime to seek a job without proper immigration papers, and making it a crime to be in Arizona without valid immigration papers. The court upheld the “show me your papers” provision, which authorizes police officers to check the immigration status of anyone they stop or arrest who they suspect is an illegal immigrant.[6]

However, in letting this provision stand, the court warned Arizona and other states with similar laws that they could face civil rights lawsuits if police officers applied it based on racial profiling.[7]

All in all, Justice Anthony Kennedy’s opinion embraced an expansive view of the U.S. government’s authority to regulate immigration and aliens, describing it as broad and undoubted. That authority derived from the legislative power of Congress to “establish a uniform Rule of Naturalization,” enumerated in the Constitution.

Arizona’s Senate Bill 1070 has been the subject of heated debate. Read the views of proponents and opponents of the law.

Marital rights for gays and lesbians have also significantly changed in recent years. By passing the Defense of Marriage Act (DOMA) in 1996, the federal government stepped into this policy issue. Not only did DOMA allow states to choose whether to recognize same-sex marriages, it also defined marriage as a union between a man and a woman, which meant that same-sex couples were denied various federal provisions and benefits—such as the right to file joint tax returns and receive Social Security survivor benefits. In 1997, more than half the states in the union had passed some form of legislation banning same-sex marriage. By 2006, two years after Massachusetts became the first state to recognize marriage equality, twenty-seven states had passed constitutional bans on same-sex marriage. In United States v. Windsor, the Supreme Court changed the dynamic established by DOMA by ruling that the federal government had no authority to define marriage. The Court held that states possess the “historic and essential authority to define the marital relation,” and that the federal government’s involvement in this area “departs from this history and tradition of reliance on state law to define marriage.”[8]

Following the Windsor decision, the number of states that recognized same-sex marriages increased rapidly, as illustrated in (Figure). In 2015, marriage equality was recognized in thirty-six states plus Washington, DC, up from seventeen in 2013. The diffusion of marriage equality across states was driven in large part by federal district and appeals courts, which have used the rationale underpinning the Windsor case (i.e., laws cannot discriminate between same-sex and opposite-sex couples based on the equal protection clause of the Fourteenth Amendment) to invalidate state bans on same-sex marriage. The 2014 court decision not to hear a collection of cases from four different states essentially affirmed same-sex marriage in thirty states. And in 2015 the Supreme Court gave same-sex marriage a constitutional basis of right nationwide in Obergefell v. Hodges. In sum, as the immigration and marriage equality examples illustrate, constitutional disputes have arisen as states and the federal government have sought to reposition themselves on certain policy issues, disputes that the federal courts have had to sort out. 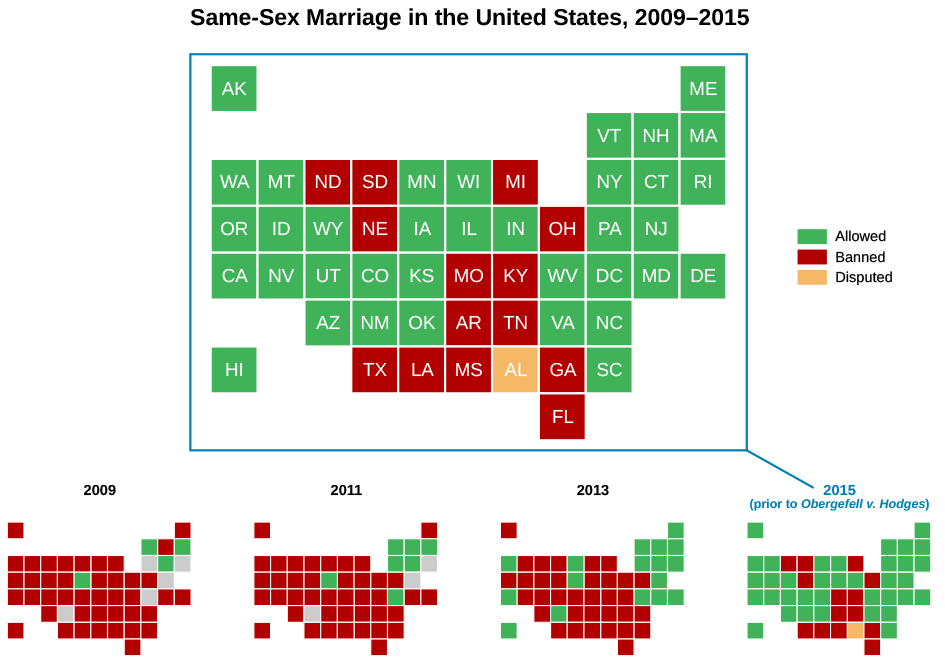 Figure 3. The number of states that practiced marriage equality gradually increased between 2008 and 2015, with the fastest increase occurring between United States v. Windsor in 2013 and Obergefell v. Hodges in 2015.

Mothers Against Drunk Driving (MADD) was established in 1980 by a woman whose thirteen-year-old daughter had been killed by a drunk driver. The organization lobbied state legislators to raise the drinking age and impose tougher penalties, but without success. States with lower drinking ages had an economic interest in maintaining them because they lured youths from neighboring states with restricted consumption laws. So MADD decided to redirect its lobbying efforts at Congress, hoping to find sympathetic representatives willing to take action. In 1984, the federal government passed the National Minimum Drinking Age Act (NMDAA), a crosscutting mandate that gradually reduced federal highway grant money to any state that failed to increase the legal age for alcohol purchase and possession to twenty-one. After losing a legal battle against the NMDAA, all states were in compliance by 1988.[10]

By creating two institutional access points—the federal and state governments—the U.S. federal system enables interest groups such as MADD to strategize about how best to achieve their policy objectives. The term venue shopping refers to a strategy in which interest groups select the level and branch of government (legislature, judiciary, or executive) they calculate will be most advantageous for them.[11]

If one institutional venue proves unreceptive to an advocacy group’s policy goal, as state legislators were to MADD, the group will attempt to steer its issue to a more responsive venue.

Lack of progress at the national level prompted them to shift their focus to state legislators, where their advocacy efforts have been more successful. By 2015, for example, thirty-eight states required some form of parental involvement in a minor’s decision to have an abortion, forty-six states allowed individual health-care providers to refuse to participate in abortions, and thirty-two states prohibited the use of public funds to carry out an abortion except when the woman’s life is in danger or the pregnancy is the result of rape or incest. While 31 percent of U.S. women of childbearing age resided in one of the thirteen states that had passed restrictive abortion laws in 2000, by 2013, about 56 percent of such women resided in one of the twenty-seven states where abortion is restricted.[13]

Some policy areas have been redefined as a result of changes in the roles that states and the federal government play in them. The constitutional disputes these changes often trigger have had to be sorted out by the Supreme Court. Contemporary federalism has also witnessed interest groups engaging in venue shopping. Aware of the multiple access points to our political system, such groups seek to access the level of government they deem will be most receptive to their policy views.