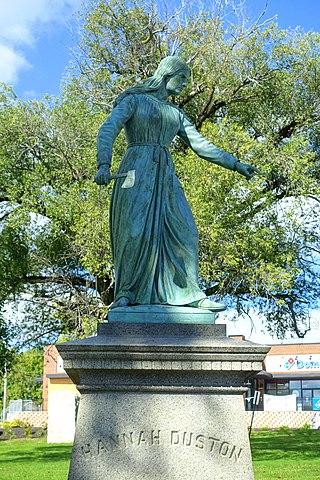 This version of Hannah Dustan’s narrative was not actually written by Dustan; rather, it was told by Dustan to Cotton Mather, a prominent Puritan minister whose father, Increase Mather, likely wrote the preface to Mary Rowlandson’s captivity narrative. Cotton Mather included Dustan’s tale, “A Notable Exploit: Dux Faemina Facti” in his Magnalia Christi Americana, which was a religious history of the American colonies to that time. Dustan was taken captive by the Abenakis after a raid on her home in Haverhill, Massachusetts in 1697. Her husband, along with several of their children, managed to escape the attack, but Dustan, her newborn, and midwife were taken; the newborn, who was less than week old, was killed while on the march away from Haverhill.

Dustan was not a Puritan at the time of her captivity; however, it is likely that she recounted the experience many years later as part of her conversion application, which would have been necessary for acceptance into the church. Although it is Dustan’s experience, it is important to remember that Mather is the one presenting it. Examining how the text engages with basic Puritanical elements like concept of the elect or the practice of typology is one useful way to approach the text. Knowing the Biblical story of Jael, who was a pivotal figure in the book of Judges, will also be helpful as you read.

Dustan’s story was as compelling and controversial when it was written as it is today. She has been lauded and vilified; statues and even bobbleheads have been made in her honor, and many have argued that her statues should be taken down. Although Mather may have been the first to record Dustan’s story, he was not the only writer to do so. Both Nathaniel Hawthorne and Henry David Thoreau, among others, have re-presented Dustan’s captivity experience. Sybil Smith, one of Dustan’s descendants, offers yet another perspective in her “Judging Hannah Duston.” Whatever you may think of Dustan’s actions, it is also important to consider who is (re)telling her story at any given time, and why they might do so. The statue shown above is one image of Dustan, but a quick Internet search will offer you many other images to consider. Consider this wide range of images as you read Mather’s words. How Dustan’s story is told, and when, and what image is presented, raises for us a number of questions about Pratt’s contact zone, not only in cultural or racial terms, but in gendered ones, too.

On March 15, 1697, the salvages made a descent upon the skirts of Haverhill, murdering and captivating about thirty-nine persons, and burning about half a dozen houses. In this broil, one Hannah Dustan, having lain in about a week, attended with her nurse, Mary Neft, a body of terrible Indians drew near unto the house where she lay, with designs to carry on their bloody devastations. Her husband hastened from his employments abroad unto the relief of his distressed family; and first bidding seven of his eight children (which were from two to seventeen years of age) to got away as fast as they could unto some garrison in the town, he went in to inform his wife of the horrible distress come upon them. Ere she could get up, the fierce Indians were got so near, that, utterly desparing to do her any service, he ran out after his children; resolving that on the horse which he had with him, he would ride away with that which he should in this extremity find his affections to pitch most upon, and leave the rest unto the care of the Divine Providence. He overtook his children, about forty rod from his door; but then such was the agony of his parental affections, that he found it impossible for him to distinguish any one of them from the rest; wherefore he took up a courageous resolution to live and die with them all. A party of Indians came up with him; and now, though they fired at him, and he fired at them, yet he manfully kept at the reer of his little army of unarmed children, while they marched off with the pace of a child of fivre years old; until, by the singular providence of God, he arrived safe with them all unto a place of safety about a mile or two from his house. But his house must in the mean time have more dismal tragedies acted at it. The nurse, trying to escape with the new-born infant, fell into the hands of the formidable salvages; and those furious tawnies coming into the house, bid poor Dustan to rise immediately. Full, of astonishment, she did so; and sitting down in the chimney with an heart full of most fearful expectation, she saw the raging dragons rifle all that they could carry away, and set the house on fire. About nineteen or twenty Indians now led these away, with about half a score other English captives; but ere they had gone many steps, they dash’d out the brains of the infant against a tree; and several of the other captives, as they began to tire in the sad journey, were soon sent unto their long home; the salvages would presently bury their hatchets in their brains, and leave their carcases on the ground for birds and beasts to feed upon. However, Dustan (with her nurse) notwithstanding her present condition, travelled that night about a dozen miles, and then kept up with their new masters in a long travel of an hundred and fifty miles, more or less, within a few days ensuing, without any sensible damage in their health, from the hardshipsof their travel, their lodging, their diet, and their many other difiiculties.

These two poor women were now in the hands of those whose “tender mercies are cruelties;” but the good God, who hath all “hearts in his own hands,” heard the sighs of these prisoners, and gave them to find unexpected favour from the master who hath laid claim unto them. That Indian family consisted of twelve persons; two stout men, three women, and seven children; and for the shame of many an English family, that has the character of prayerless upon it, I must now publish what these poor women assure me. ‘Tis this: in obedience to the instructions which the French have given them, they would have prayers in their family no less than thrice every day; in the morning, at noon, and in the evening; nor would they ordinarily let their children eat or sleep, without first saying their prayers. Indeed, these idolaters were, like the rest of their whiter brethren, persecutors, and would not endure that these poor women should retire to their English prayers, if they could hinder them. Nevertheless, the poor women had nothing but fervent prayers to make their lives comfortable or tolerable; and by being daily sent out upon business, they had opportunities, together and asunder, to do like another Hannah, in “pouring out their souls before the Lord.” Nor did their praying friends among our selves forbear to “pour out” supplications for them. Now, they could not observe it without some wonder, that their Indian master sometimes when he saw them dejected, would say unto them, “What need you trouble your self? If your God will have you delivered, you shall be so!” And it seems our God would have it so to be. This Indian family was now travelling with these two captive women, (and an English youth taken from Worcester, a year and a half before,) unto a rendezvouz of salvages, which they call a town, some where beyond Penacook; and they still told these poor women that when they came to this town, they must be stript, and scourg’d, and run the gantlet through the whole army of Indians. They said this was the fashion when the captives first came to a town; and they derided some of the faint-hearted English, which, they said, fainted and swoon’d away under the torments of this discipline. But on April 30, while they were yet, it may be, about an hundred and fifty miles from the Indian town, a little before break of day, when the whole crew was in a dead sleep, (reader, see if it prove not so !) one of these women took up a resolution to imitate the action of Jael upon Siseria; and being where she had not her own life secured by any law unto her, she thought she was not forbidden by any law to take away the life of the murderers by whom her child had been butchered. She heartened the nurse and the youth to assist her in this enterprize; and all furnishing themselves with hatchets for the purpose, they struck such home blows upon tlio heads of their sleeping oppressors, that ere they couid any of them struggle into any effectual resistance, “at the feet of these poor prisoners, they bow’d, they fell, they lay down; at their feet they bow’d, they fell; where they bow’d, there they fell down dead.” Only one squaw escaped, sorely wounded, from them in the dark; and one boy, whom they reserved asleep, intending to bring him away with them, suddenly w.nked, and scuttled away from this desolation. But cutting off the scalps of the ten wretches, they came off, and received fifty pounds from the General Assembly of the province, as a recompence of their action; besides which, they received many “presents of congratulation ” from their more private friends: but none gave ’em a greater taste of bounty than Colonel Nicholson, the Governour of Maryland, who, hearing of their action, sent ’em a very generous token of his favour.

A Notable Exploit: Dux Faemia Facti by Cotton Mather is produced by HathiTrust and released under a public domain license.

Open Anthology of American Literature by Farrah Cato is licensed under a Creative Commons Attribution 4.0 International License, except where otherwise noted.