Sewage: A Problem of a Developing Country 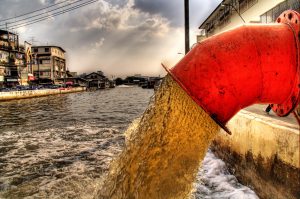 Did you know that 60% of the world does not have access to proper sanitation1?  For someone that lives in a developed country that might seem impossible to imagine, but it is the reality of 4.5 billion people1. In fact, in developing countries like Brazil that means 17% of the population does not have any sewage treatment2, but instead sewage waste is disposed of in rivers and streams in the open, which is a major health risk for those in these polluted areas.

I was one of those people who was ignorant to the harsh life of others. However, due to the 2020 Coronavirus Pandemic, I returned to my home country of Brazil and viewed this issue first-hand in the poorer parts of my county. To further investigate this on-going problem, I sought to talk about this problem with someone willing to take pictures and define their importance, so that I can better capture the essence of the environment and its man-made complication.

My participant’s name is Luiz Roberto Guimarães Guilherme,Ph.D., 56. He is my uncle. I requested him to partake in this research because he has Ph.D.s in soil studies, like crop and soil sciences and environmental toxicology. With his qualifications and abundant knowledge of the effects of sewage in developing countries, I knew that he was the best person to teach me about not only the sentimental part of the issue, but also the scientific. His assignment was to take three pictures of scenes that portrayed the problem of sewage in our county. He also had to describe why he took those pictures and why it was so crucial for them to be shared to a wide audience.

With full disclosure of all content provided to me by Dr. Guilherme, I will show the reality of the problems of a developing country.

“This is how the situation was in Itutinga. Sewage was either put in septic tanks or thrown directly into rivers without any type of treatment, contaminating groundwater and surface water bodies. The city of Lavras, has sewage treatment, but Itutinga, which is a very small town, did not until a short time ago. In Minas Gerais, more than 50% of the 843 counties don’t have sewage treatment. Itutinga, for example, had nothing, so 100% of the waste was thrown in rivers or septic tanks. We joke that in Brazil out of four feces, only two are collected in a sewage system. And out of the two collected only one is treated, so the other is collected and returned to the river. Collection in Brazil occurs less than 50% and treatment only 25%. Brazil is today, in terms of basic sanitation, compared to Europe in the 14th century. That means that what we see in Sao Paulo, Belo Horizonte, and in Rio de Janeiro ceased to exist in the 14th century, during medieval times! In Brazil, many talk about environmental problems, when what kills the most is sewage! Thus, in the past decades, public figures all over Minas Gerais are trying to revert this situation, like was done in Itutinga.”

The image by itself tells a story. The land is full of fecal matter that is cracking, the liquid that streams to the bottom of the image is dark gray, almost like the poison that could be seen in a Disney movie. The image shows the ugly corrosion caused by sewage in the land as it is simply disposed of without care. Dr. Guilherme teaches the basics of sewage. As a professor, he is objective when conveying the subject with numbers, which is meant to alarm the audience. Statements like “50% […] don’t have sewage systems” demonstrates the gravity of the absurd amount of people that do not have what should be a basic need for all. In addition, the joke he made about the system indicates his strategy of educating the population in a way that they will have that excerpt marked in their heads. His way of joking causes people to be aware of the gravity of the problem.

Cities have a collection of sewage and a collection of rainwater (a.k.a. rainwater collected and taken through pipes to a river). In the past, these systems were together, in fact, the sewage was driven to the river in Lavras like the one seen in the picture. Even though the process has changed, you can imagine the amount of accumulated waste there still is in this river due to decades of this process.

In addition, there are a lot of illegal constructions conducted not only in Lavras, but the whole country. Houses are built without a record in the city, in places where there is no instated sewage system. For example, in Rio de Janeiro, in the region of Baixada Fluminense, the favelas are all made this way. Because millions of people have no sewage system or space, they have no option but to deposit what they produce in the river. Sometimes, city mayors or the state prevent the ease of this process to try to institute a sewage system, but because of these unruly constructions it makes it almost hopeless for public officials to establish sewage systems.

In any case, in Lavras  they, theoretically, don’t dispose of sewage in rivers anymore, however, cleaning all that is very difficult. In fact, the scent in some parts of that river are very strong due to the sediments that still fill the bottom of the river. Unfortunately, a big part of all rivers, even in places where sewage waste is not anymore disposed, still have an abundant amount of solid residue and plastics. Of course that occurs all over the world.

Dr. Guilherme sees how far cities like Lavras have come, but does not allow for the advances to be over and the picture shows that. Although the water does not look as if it has sewage running through it, it does show other impurities, like plastic and other debris. Also the mentioning of the bad odor of the water, indicates how unpleasant it must be to live in areas that are in close proximity to open air sewage. On the other hand, he spoke about illegal construction of houses, which is another problem Brazil faces. When millions of impoverished people construct houses in the same area that results in favelas. These communities are in irregular areas where there is a danger not only with the people’s health as it relates to sewage, but also geographically with the case of landslides.  Even though the government should implement more restrictions of sewage dispersal or ideally construct treatment centers it becomes very hard for them to do so if the construction of illegal houses is never-ending.

“The picture displays an excavated area used for waste disposal because of the lack of a sewage plant. Although it is a cheap alternative, it cannot be compared to the benefits of a sewage system or treatment plant. This is because if it rains and the water (along with the waste) overflows, the liquid will fall down the hill to the river that flows below. This causes two critical scenarios: overflowing of the area transporting the waste to surface water bodies or if there is no protection on the bottom of the ditch, there can be infiltration of the sewage to groundwater bodies. In both scenarios, the water contaminated can be the source of drinking water, and if that is the case those who consume the water will consume several pathogens along with it, causing diarrhea in many cases. The most drastic example of diarrhea is cholera affecting roughly 1.5 to 2 billion people worldwide, especially the young ones, the ones that do not have any way to protect themselves. Kids are the most defenseless because they are more susceptible to consume contaminated food and drinks. Plus, children do not have the load of antibodies that an adult has, so when they are exposed to these pathogens that are carried by untreated water as they drink the water they will suffer from many serious illnesses. In addition, during the coronavirus, the index of vaccination dropped exponentially, so diseases that could be prevented with vaccination, some that were even caused by lack of sanitation, this year certainly became compromised.”

The third picture by Dr. Guilherme is very similar to the first picture, but it differentiates simply because it explains another dilemma that the lack of proper sanitation can cause: the spread of sewage. This can be apparent when seeing that the sewage site is in a hill. The height of the hill allows for transportation of the unsafe material disposed in the ditches shown in the picture.

Throughout the analysis of the third picture, it is very clear that Dr. Luiz Roberto Guilherme has extreme concern for people’s health, especially children. As a father, I believe his concerns for children’s well-being is even heightened. His description really demonstrates the more emotional effects caused by the lack of sewage systems. Just imagining that the lack of a basic human need can cause cerca 830,000 people to die yearly3, causes a deep pain in my heart. Facts like these are the reason why Dr. Guilherme and I are concerned about the issue that encompasses Brazil and other 137 developing countries4.

Dr. Luiz Roberto Guimarães Guilherme is ultimately invested in a progressive path for Brazil. He used his vast knowledge about global pollution to relate to Brazil and its current state behind developed countries. The participant is passionate about his science, improving people’s living conditions, and more than anything improving public cognizance, so that things can be altered in a city without basic sanitation. He sees his nation’s potential and believes in a better future if politicians and the citizens they represent can help each other help themselves. In a way, the research we composed is similar to what can be found within the Latinx Environmental Justice Literature. Just as Kamala Platt described, analyzing the environment in my community involved “engaging the nexus of nature, culture, and environmental degradation and justice”5. After all, our goal is to lower the percentage of those without the basic necessity of sewage system and treatment, as well as lower the percentage of people who die due to the lack of sanitation.

Developing sewage systems and treatment of the water all over the nation, systems like the one seen below, can be the first step Brazil can take to go from a developing to a developed country!

To conclude, I would like to leave the reader with the impactful words of Dr. Guilherme:

“This is a problem in Brazil, but also in many developing countries and is one thing that has to be dealt with ASAP. This is the biggest environmental issue, because it not only destroys nature, but it heavily affects people, especially the health of children, the hundreds of thousands of children that die due to lack of sanitation.”

This work (Sewage: A Problem of a Developing Country by Marcella Britto) is free of known copyright restrictions.