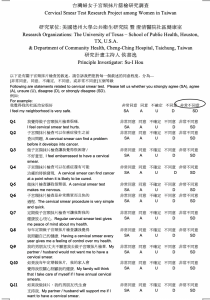 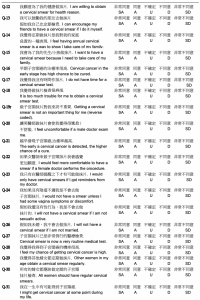 Brief Summary of the Research Instrument

This appendix contains measurement items of Cervical Smear Belief Inventory (CSBI) for Chinese Women. The baseline data, collected from the controlled randomized trial (n=424) described in Phase III, were used to examine the psychometrics of the research instrument. Reliabilities showed good internal consistency for the perceived Pros, Cons, and Susceptibility scales (α ranged .78 ~ .87). Factor analysis showed good construct validity of the scores of CSBI which revealed concordant patterns with existing social and behavioral theories, except that the Norms scale was loaded with the Pros scale. Moreover, in the Cons scale there appeared to be a “cultural belief toward virginity.” Item-discrimination analysis showed that all items in the CSBI successfully discriminated women with favorable cervical smear beliefs from those with unfavorable beliefs (p<.001). In summary, many psychometric properties of the CSBI showed that the scores of the inventory were reliable and valid to assess belief towards cervical smear among Chinese women (Hou & Luh, 2005).

Mixed-Methods Evaluation by Su-I Hou is licensed under a Creative Commons Attribution-NonCommercial-NoDerivatives 4.0 International License, except where otherwise noted.